Hunger. Also, human contact is good for you (whodathunk?) 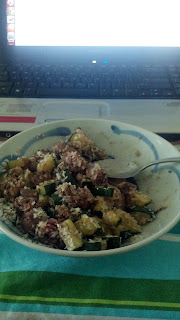 I'm eating this right. now.  And it is delicious.  Stir-fried chopped squash, chicken hearts and ground beef in a hell of a lot of butter, with a little salt and more than a little coconut sprinkled on top.

Last night I got really hungry.  This isn't a very common occurrence.  It's not that I intentionally try to eat ahead of hunger with lots of small meals - tried it for a long time and it just doesn't work But the stuff I do eat, which is more and more based on medium volumes of meat and veggies, with that order of importance, in a large volume of fat, just keeps me so incredibly satiated that I almost never feel really honest-to-god(s) stomach-grumbling hungry any more.  Yesterday was a fluke because I'd woken up lateish and run to work with no breakfast, then worked through the day on two cups of creamy coffee and one (ONE!) piece of bacon.  And...no hunger until around 6pm.  None.  I also didn't feel totally up to scratch, but I can remember feeling meh before I ate like this, and always being hungry throughout illnesses, even though I always secretly hoped I'd be non-seriously sick for a few weeks and totally lose my appetite so I could finally get rid of my gut.  Nope...never happened.

Right now, though, the obvious extreme efficiency of what I'm eating makes me think about trying intermittent fasting again, reason being that although it's relatively easy to maintain my figure and abilities eating like this, I'd like to start getting noticeably better at badassery again, part of which includes (for me) lowering my body fat just a bit.  My first bout with IF, as I've mentioned before, got me kind of wacko as far as specifically planning what to eat when, and skipping or rescheduling other things so I could eat on time.  Disordered eating is disordered eating, whether it's how much or how you think about it.  But now I think I could be a little more successful at it - I know I can go a very long time without suffering ill effects from not eating, so I can worry a little less about scheduling and just eat more when I have the time.  More on that one later.

So this morning I finally got to hang out with my lovely friend Amy, for whom I was a mother's helper last year, and her adorable little monster Jojo, who is now literally twice the size he was when I first met him at 3 months.  It's cray, as the kids are wont to say these days.  We had a great time just sitting at the table over coffee and alternately talking about our lives and cooing at Jojo trying to ride his horse on wheels (which is a CAR, as anything with wheels is a CAR, even those rolly desk chairs) but not realizing that he can scoot it with his feet, so he just straddles it and then stands up and walks around with it.  Her neighbor stopped by too, unfortunately because she had locked herself out of her house, but it still turned into a fun girl-talk-and-coffee time.  I have missed that SO much.  There's a big disconnect in American society - people live so close together, but just stopping by to chat and have a cuppa is absolutely unheard of.  In my own life, I make myself so busy with work and school and Man that I feel like I've run out of room for more human connections once I actually get some time to myself, so I generally spend it running around in the woods, alone.  And that can be a wonderful thing, but I've starved myself of the other kind of connection to nature - plants are all well and great, but when it comes down to it, humans need other humans.
Posted by Unknown at 10:23 AM