So after a good week of not really working out at all (and spending a lot of time curled up in cars, which is murder on flexibility), I have returned to the fold like a little lost lamb.  And by fold I mean Crossfit and by lamb I mean someone who seriously needs to step it up, because I'm hurting like a bitchmonster now.

Wednesday: I looked at the CF website and saw that the WOD for that day involved about 180 double-under jumpropes with some sprinting.  Now, I'm really not great at those at the best of times, and with two leg-heavy workout from the last two days I just didn't want 180 new welts on my legs from missing the damn rope every time.  So I went to the bootcamp. 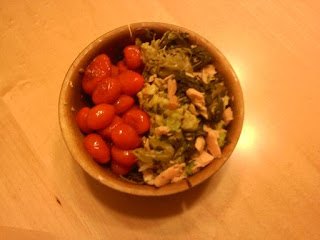 Dinner!  Salmon, collard greens from a very Southern friend and avocado all mushed together into a big delicious hash, and also grape tomatoes sauteed in EVOO until they popped.  Not shown: some tinned fishy stuff.  Not sardines, something bigger.  It was delicious, whatever it was. 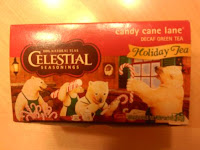 This tea is incredible.  Anyone else tried it?  It's mainly peppermint...but also kind of sweet and has almost a chocolatey undertone to it.  Makes me think of hot chocolate with peppermint schnapps (which is aMAZing, if anyone wants to try it) but without all that sugar and booze and stuff that is bad for me but so delicious. 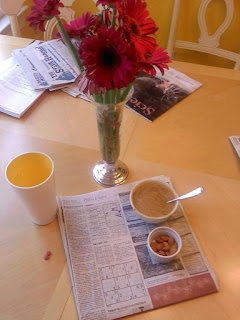 Today's breakfast: I wasn't too hungry, but had some almonds and warm no-sugar apple sauce with cinnamon, cloves and nutmeg just to have something in my stomach to balance those pills.  That's right, I took drugs.  Without them I would not be walking right now, I swear.  I don't really like relying on stuff that treats the symptoms and not the cause, but now I have to get dressed like a normal person and go do errands and chores, so I can't be stumbling around zombie-like scaring people.  So, bring on the meds!  :D

Lurkers: What is your favorite tea or other comforting hot drink?
-N
Posted by Unknown at 7:50 AM