This is not for you.*

This is the way this blog came into being: as a simple food-mood-exercise log.  It expanded way past that eventually, and there was a point when I was really proud of how things were moving along.  But things change, and now it seems like this incredibly basic function is the one thing that might actually get me writing something on a regular basis again.  I keep wanting to write these big interesting posts, but especially as my prose skills have waned with disuse, that often proves to be too much pressure and I end up drafting tons of stuff but very rarely finishing and publishing any of it.

Here's what I had to eat today.  If this bores you, I'm sorry, but I'm not changing it.  Hopefully things will get more interesting in time (especially if I forget to correct my autocorrect, which wanted me to say "hopefully things Erroll hey!" at the beginning of this sentence).  But here's where it's at right now, and indefinitely.

BREAKFAST
Approximately a cup each of leftover roasted chicken with a little schmalz and butter and lactofermented sauerkraut.  A cup of coffee with milk and cream - both raw (unpasteurized), with the cream so thick you have to scoop it out with a spoon.  A cup of homemade raw whole milk kefir.  The incessant whining of the dog telling me that her stomach is literally about to implode (despite the bowl of food she had 10 minutes ago) and if I give her just one piece of chicken it will save her life!!!

LUNCH
One zucchini's worth of zucchini hash, one piece of beef heart and a chicken liver for good measure, all cooked in butter. A small handful of almonds that I soaked and dried, plus a couple Brazil nuts.  Two glasses of uncultured milk.

Exercise: just got back from a lovely hour spent at the Eno with the dog, mostly walking with some running bouts and a nice 5-minute soak in some surprisingly cold water.  I got that crazy zombie running app that all the kids are talking about these days and I absolutely love it.  I'm usually a proponent of listening to nothing but your breath and footsteps while running through the woods, but this thing actually has me excited about exercise again, and it's a little embarrassing how big a deal that is.

DINNER
More sauerkraut and chicken (1.5 c and about 2/3 c, respectively).  One baked-in-the-shell egg (SO much less time-intensive than boiling them!). A little cold butter, chopped up and sprinkled on after this picture was taken.  One glass of kefir.  Not shown: a half glass of kvass, which is this salty lactofermented beet juice that's supposed to be a nice probiotic tonic.  My fridge is brimming with it right now.  Everything is very cold because it's ridiculously hot and my apartment only has window AC units.  Ice bath tonight...

I "cheated" on paleo today with about a half of a freshly-baked pretzel and several glasses of lemonade.  My excuse was that I had to taste-test them (I'm a baker, and this is a fairly new recipe that's still in the perfecting stage), and it's freaking hot and I needed to stay hydrated.  Problems with that?  I don't need more than a finger-joint's worth of pretzel to assess taste, and any more than that makes my stomach go kaPOOF! which it totally did.  Which always happens.  And it's never fun.  And in this case I don't even like pretzels, so the taste didn't even make up for the unhappy belly.  As for the lemonade, I just need to suck it up and drink some damn water already.

Bonus points to anyone who 1. reads this, 2. *can name the reference in the first line and 3. can tell me how to use the Android Blogger app so that the pictures appear where I want them to. 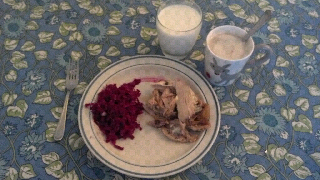 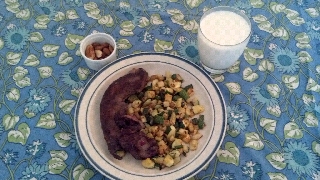 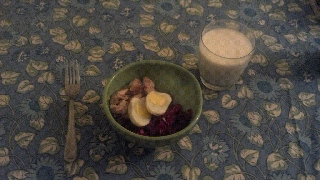 Posted by Unknown at 5:30 AM No comments: Links to this post

...and what's with all the freaking loincloths!  Knee-high boots can be pretty appropriate, though, depending on the context.

What the heck am I talking about?  Go do a Google image search for "female warrior," "warrior woman" and you'll understand.

Why was I doing a search like that to start with?  Because lately I've been pondering the importance of costume, and how it affects...well, pretty much everything.  Depending on what I'm wearing, I might choose to eat different foods or a different amount (gluten and tight waistbands? do. not. mix.); I might choose to run instead of walk; I might get a mood boost from the bright color or nice fit; I might be inspired to act up to my image if I dress in heavy-duty workout clothes for a planned walk at the Eno, or wear something that screams "smart and nerdy (but cute!)!" to work at the lab or go to classes.

I've been saying to myself lately how when my life is idiomatically "out of balance," I literally feel unbalanced and clumsier than I should be.  My walking stride gets more awkward, my joints hurt when I walk, run or even stand for too long.  I was sure that I just had to focus on clearing up EVERYTHING CRAZY IN MY LIFE and then it would just go back to normal!  Easy, right?  Yeah.  I'll get back to you on that one.

This past weekend, I dressed up as stated above for a riverwalk.  Black yoga pants, rolled up to the knee; 4srs sports bra; nonbinding tank top; my beloved Inov-8 parkour shoes that are slowly disintegrating after being used as kitchen kicks for half a year.  And...I moved.  I didn't just change location, I practiced movement as an art; I performed movement.  I walked without growing weary, I ran without fainting (or, in my case, puking), and I swam from the dam all the way upstream to the riverbend and back.  I reclaimed a little bit of the freaking awesome warrior woman that I was becoming last summer.  And I'm not ready to stop.

So I want to create a costume for myself that goes with that woman - not so I can limit my time being her to only when I'm wearing the getup, but because the mental boost it would give me is exactly what I need to start playing the role of who I used to be, as practice for actually becoming that again.  Problem is, I want to add a little inspiration in the form of a picture of another badass chica.  And, as stated above, the available options are seriously lacking in sanity.  But after some serious search work, I figured out that I want to dress a little less like this

and a little more like this, for the gamers

or this, for the history buffs out there (she's supposed to be Bouadicea, the warrior queen who led an invasion against the Romans, burnt the future London, then a Roman settlement, to the ground and killed a lot of people.  Brutal, but so were the times, and no one can say she wasn't the very epitome of a warrior woman). 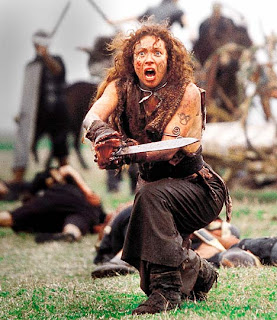 So here's the ideas, starting from the ground up.

SHOES
Must fit well.  I know this sounds ridiculously intuitive, but I've been flopping around in my ragged, too-big Toms for months now and only just realised that maybe it was the shoes that were clumsy and not me.  For now my Inov-8s still work, but I'd really like to get or make something even more minimalist - some huaraches come to mind, or moccasins, perhaps custom-made with a separate big toe and elastic around the arch...oooh, ideas :)

PANTS/SHORTS
Different garb for different use - long pants for trekking around in unmown fields and close-growing copses, shorts for scampering around in clearer areas and for river swims.  Or perhaps the best of both worlds: low-profile shorts or knickers underneath, non-rustling easy-off long pants on the outside.  Take that, ticks!

TOP
Bra: probably as heavy-duty as I can find and still breathe in.  And also not made of metal.  Shirt: only until I like my abs again.  Before that, as loose as possible and sleeveless.

ACCOUTERMENTS
Usually I just have my keys clipped to my waistband, but I've often thought it would be nice to have a small, light, very very low profile daypack, with a bottle of water, snack, mini towel, etc, as well as being a place to put my keys so they stop lacerating my hip when I run.  I used to have one, but it finally came apart this past year, and also had a lot of straps to get hooked on branches and stuff.  That's always fun.

I don't have an iPod, but I heard about this amazing running app that makes it sound like you're being chased by zombies.  I really really want it, but if I got it I'd have to get something to strap my phone to myself.  Anybody else do that?  What works?  What doesn't?

Also pretty awesome to have would be a charm to wear on my neck or ankle, just as kind of a talisman to remind me who I'm becoming again.  That's a little harder to find, though.  I'll keep an eye out.

Apologies for the awkward prose, guys.  I really just wanted to write something so I start getting back into the habit.

Posted by Unknown at 1:22 PM No comments: Links to this post