So many shirtless men (part 1) 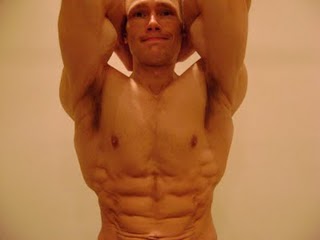 Not gonna lie, this guy frightens me just a little.  But he gets insane results and backs up everything he says with exhaustive research and scientific studies.  He also seems to be the most widely-cited authority on intermittent fasting, heretofore referred to as "IF."  The general gist is that you have a window of time in the day during which you eat all of your meals, and outside of which you abstain from anything with more than a few calories, preferably sticking to water.

His method is the one I'm trying first.  It seems to be a bit of a magic bullet - that is, if it really works.  I can't quite wrap my head around the fact that consuming the same amount of calories in a smaller time span could actually work as well as (if not better than) basic calorie restriction, which is what Berkhan puts forth on his site. But it meshes perfectly with my existing schedule - basically, all I'm doing is skipping breakfast, then making my first meal of the day that which I eat after getting back from work at about  1pm.  Berkhan mentions that, while men seem to do best on an 8-hour window, women have a little more leeway: a 10-hour window is recommended for us of the fairer sex.  Why?  Because it makes us less irritable.  No, seriously.  We'll see about that one.  Still, I'm starting with that window and seeing where it takes me.

There's also a note in Berkhan's guide regarding consumption of...well, edibles, if not necessarily food, around training.  He's not a fan of completely fasted training (despite a study quoted about Muslim athletes followed during Ramadan - apparently the fact that they consumed nothing at all, not even water, during the day had no real effect on their athletic performance).  Instead, he recommends taking a smallish amount of a mixture (powder or tablets) containing branched-chain amino acids, or BCAA; alternately, a little whey protein powder mixed with water could stand in.  The purpose of this seems to be to get some of the benefit of eating a little protein pre-workout (as Whole9 recommends in the form of real food, and which I'm used to) without the actual calories.  I don't really make it a practice to take regular supplements of any kind (exceptions include Omega 3 fish oil, when I remember it), so I'm a little iffy about this, but the way that my schedule is set up, I doubt I'll even need to consider it very often - most of my workouts are later in the day, and so would fall within the feeding window, negating the need for (according to the forums, pretty damn nasty-tasting) fake-food powdery shit.

This is the end of day one for me, and I think the first things I need to learn from are:

CrossFit!
This week is "back to basics."  We're spending time reviewing all the simplest movements that everyone tends to get sloppy on, and making sure we can do them perfectly.  Today's programming:
Skill: Push-ups
WOD
Run 400 m
50-30-20 reps of
Run 400 m
Finished in 14:41.  I really need to get cracking on the DUJRs - it's time I had them perfect already, for serious.  But then Coach Phil told me I had the most beautiful KB swings of the whole day.  Aw shucks, I ain't all that.  But I certainly don't mind hearing it :D
-Nelly
*He's not the number one shirtless man in the world.  (That honor belongs to a certain caramel-colored cutie up by Cleveland.)  I just happen to be testing his method first.
Posted by Unknown at 6:22 PM