Return of the Caveman Ninja

Alternate title that was too long to use: "I'm covered in bruises and too sore to move.  GIVE ME MORE!"

Yep, you guessed it!  Colin's back!  I'm signed up for his Fundamentals of Parkour series of classes, but since I wasn't able to make the first session last Sunday (because I was watching The Man strut his bad self across the stage while wearing a funny hat and a dress), we met up this afternoon at the Forest Theater in Chapel Hill.
If you live in the Triangle or ever visit this area, try and stop by there - it's just lovely!  However, it's also entirely made of stone and hard-packed sand - not so easy on the ol' bod.  It's amazing how much the awareness of pain disappears, or at least significantly lessens, when you're having an absolute blast.  Yeah, it hurts when I launch myself headlong into the abyss, only to crack my shins on the edge of a solid stone step.  But feeling pain is a lot less interesting than trying the leap again, so it gets pushed aside.

We started (and eventually ended) with jumping.  Well, landing first, and then jumping.  You might think that you can't land before you jump, but apparently if you just kinda shove yourself over the edge of something and then land, it just counts as falling, not jumping.  The way you land is on your toes, slightly bent over, in what's called the cannonball position.  If you need to, you can also continue the momentum forward and put your hands down, but never your knees.  The worst thing to do when falling, apparently, is to land on your toes and then let your knees fall forward.  Then they go crunch.  Ow.

So once my landings were looking decent-ish, we moved on to the actual jumping and then landing part.  It's crazy technical, and absolutely maddening how completely naturally it seems to come to Colin.  You have to fling your arms forward at the same time as you extend your hips and take off at a 45-degree angle to the ground and pick your feet up and not overshoot and also land on your toes.  Yeah. 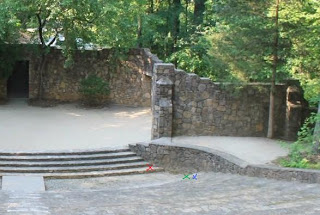 This is where we jumped.  Ending point is the step where the red X is.  I started from the gravel ditch just a couple feet away, then tried backing up until I went from the step with the green X, which is at the same height as the other one, maybe 5 feet away?  I'm not sure.  Colin kindly helped out by letting me know that the floor was now a pit of lava filled with spikes and I would die a horrible, fiery, impaled death if I didn't make the jump.  Thanks, Colin.  You're a real card.  For everyone else: the primary rule of doing anything at all with this guy is that the floor is ALWAYS lava.  And when it is not, CRAWL!

So after I hove myself over certain peril enough times to satisfy, he had me step up.  Just one step.  Not even a foot back or 6 inches up, just to where the blue X is.  But damn if the vapors from the lava didn't make me absolutely sick.  I have this thing about falling...and just that little tiny difference made me freeze up completely.  Sooo we moved on.

To the normal person, walls are annoying.  They're always getting in the way!  Not for the caveman ninja, though!  He just runs at them headlong and hopes for the best bounces right on up there, catching/pushing with his arms but doing most of the work with his legs.  If the wall's higher than about nose-height (the one we practised on was about a foot over my head), the trick is to take a final step on the wall itself, propelling yourself even higher and pulling yourself forward with your arms so you don't just fall backwards.  From there it's just a quick twist to get your foot (NOT your knee; that hurts like a bitch and I am bruised) on top of the wall and then stand up.  Piece of (paleo) cake!  This was probably my favorite section because I could actually do it without too much pain or terror.

So when the wall is too tall for you to scale that way, the aim is to jump as high as possible in the way just mentioned (by pushing off, or "tacking," with your foot) and try and grab the top of the wall so you can pull yourself up.  The fact that you need extra height means you need to start off with more speed.  Which means that you RUN STRAIGHT AT THE (10-foot high, solid stone) WALL.  This is just a little unnerving, not to mention difficult.  You have to push off while you bring the opposite knee up as high as possible, keeping the same hand in front of your face (so you don't kiss stone if you miss) and reaching the opposite hand up to grab...or in my case, just kinda slap at the wall.  I got up to the very edge of the top but couldn't actually transition to grabbing it.  Next time...

Then we picked up and dragged around some big huge fallen trees for a while.  Fun and useful but not particularly noteworthy.

And then...it was back to the jumping spot.  Colin really wanted me to at least attempt a jump from the farther starting point.  I did too, but I also didn't want to trip and break my head open on the stairs and die in a pool of mashed brains.  So I jumped down to the (molten) gravel a few times first, burning my feet off in the process.  Then I jumped from the lower step to the opposite one without doing any serious damage.  Then I shut my brain off and leapt...

...and I made the hell out of it.  Had to catch myself on my hands but I stuck it.  And then I did it once more (or twice, if you ask Colin, who is too nice) before my brain woke up again and I started freaking out.  So that was it for the day.

Next session is on Sunday and I CANNOT wait.  Stay tuned for more tales of the Caveman Ninja!  What's a good sidekick/student/minor character name for me?  Let me know in the comments!

PS: Two direct quotes from Colin today: "Oh, excuse me, Mr. Ant!" (as he stepped sideways to avoid crushing the insect in question) and "Oops!  Sorry, Plant!" (as he accidentally dropped a log onto a shrubbery).  Need any more proof that he is not only a trip and a half but awesome as all get out?  I didn't think so.
Posted by Unknown at 9:26 PM

Email ThisBlogThis!Share to TwitterShare to FacebookShare to Pinterest
Labels: aping it up, fun