Breakfast: 7:30 amNotes: Slept in for as long as I could today, which turned out to be 6:45. I like early mornings and being woken by birdsong :) I like a lot of things, not the least of which is the fact that I QUIT MY JOB!!!!!!! XD 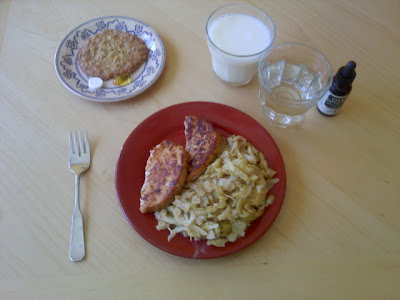 Notes: Spending the day cleaning. I just recycled 3 years' worth of old physics notes (saving some for my illustrations...I really need to start drawing again!). I kind of feel like I should burn them...but this way is more green. It was quite an armload to take. 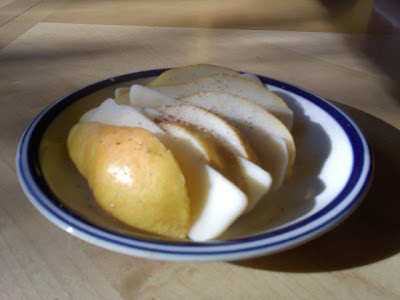 Notes: It's a gorgeous windy sunny day! Papa got a couple bags of garden soil with fertilizer - it's still a little chilly but I'm going to work at least a little into the soil while there's still daylight. 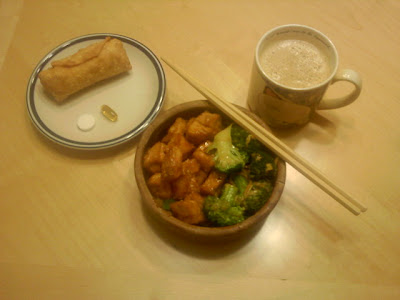 Notes: Watched most of "10 Things I Hate About You" with the rents, then worked with T on his business plan proposal, which was due at midnight. I was fading a LOT near the end but he got done with 15 minutes to spare, and the finished product was pretty good. He's got a lot invested in this competition now - he said last night that moving up to the next round was entirely in the bag. I really hope he's right. I mean, I know how much he's done for his idea and how well it could work once we get everything fleshed out, but the hardest part for him is the presentation of his ideas. Going to work with him on that when I'm up there next week.
Posted by Unknown at 4:40 AM No comments: Links to this post

Breakfast
Notes: Still sick and meh. Soup is the best.
Posted by Unknown at 8:38 AM No comments: Links to this post

Breakfast
Notes: T woke me up today instead of the other way around. I kinda liked it but then again there's the part where he has to put up with my pre-coffee morning grumpiness while still being semi-grumpy himself. He covered it up very nicely though.

Then I got sick
Notes: Then I came home and slept for about 6 hours

Food I had later, at various times
Notes: Bleargh.
Posted by Unknown at 3:06 AM No comments: Links to this post

Breakfast
Lunch
Notes: I loooves me some vinegar today!

So over the past week or so I've been slowly polishing off a jar of pickled garlic. This is partly for the taste (seriously!), partly for the immune boost (several of my coworkers have gotten the sniffles and I wanted to avoid it) and partly to reassure T that when I go out with my friends, it really and truly is not to pick up someone. Problem is, that whole bit about the garlic smell exuding from everywhere once you eat it...is true. Merh. Given, I was eating a LOT (like more than 10 cloves a day)...but still, it is delish. This is when I have to balance my desires to eat tasty healthy things and also to be around people. Thinking of trying out garlic supplements to get the benefit while avoiding the odor, or maybe working more roasted garlic into my diet and seeing if the chemical change helps. Or maybe just limiting myself to 3 cloves a day. Ok maybe 5.

In other news, I've been doing the whole mix of sugar/salt/vinegar in a lot of things I've been making lately, and it's working well. Things just taste a little more balanced. I'm not sure how to translate this to dairy dishes, though. Perhaps use yoghurt or buttermilk or something? Food for thought...ahahaha, I kill me! :D

Later
Notes: Went to a coffeeshop and sat and knitted. I'm such a hipster. Seriously need to go there more often to study though.

Dinner
Notes: I'm thinking I need to stop doing the Chinese thing for a while. Or maybe mostly making my own food but having one eggroll or something. Seriously, it's a lot.
Posted by Unknown at 11:41 AM No comments: Links to this post

Posted by Unknown at 3:04 AM No comments: Links to this post

Breakfast
Lunch
Before Crossfit
Crossfit
Dinner
Notes: I kinda feel like I got punched in the ovaries, or the kidneys, or both. Probably not drinking enough water, as well as approaching certain times (still a few weeks off, but I've been neglecting my happy uterus tea lately, so symptoms are worse and arrive sooner).

Had some good talks with T lately. They still get a little stilted and annoyed on both sides at times, but I think we're reaching the right conclusions.

-N
Posted by Unknown at 5:24 PM No comments: Links to this post

Breakfast
Notes: Feeling more than a small amount of dread at the thought of going to work. It's been bad for a while but I guess it all kind of gelled yesterday. Looked through craigslist with Amam and found a couple things to try out.

Posted by Unknown at 2:33 AM No comments: Links to this post

Lunch (as it were)
Notes: Yes, that was it. No, I didn't have breakfast.

Dinner
Notes: My job is fucking insane. I need to be doing something where I don't burst into tears as soon as I get in the car to come home. Got stuck in the snow 2 miles from the place, walked there over a sidewalk entirely covered with frozen footprints in deep snow turned to ice (read: prime ankle-breaking area) and still managed to get there only 10 minutes late.

Found out that the new guy (the one I was worried about replacing or interloping my spot) has stress issues in his spine so severe that if he doesn't change his life now he'll be in a wheelchair in 10 years. Talked to Boss F about my concerns about being out of the loop and possibly being replaced or whatnot, and it turned into a discussion about how I shouldn't have had T even in the same building as the cafe while I was working there (as well as not taking initiative). She also talked to the new guy and ended up sending him home early while she thought about whether she could still use him in his present condition. He left in tears.

So it was me and Maritza alone for another couple of hours, with F stepping in when Maritza went on her break - covering ok fine, but still leaving myriad tiny messes everywhere she went. Finally, she kept me an hour after I should have left trying to teach me ordering. It's always like this - she has people do important tasks or learn stuff they really need to know at the busiest or least opportune of times (like when she had the new guy do inventory of EVERYTHING during the biggest rush of the day when he didn't even know where everything was yet).

Talked to T on the way back and got a lot of swift kicks in the ass about how I'm killing myself and seriously hurting things between us the more I continue with this job. This is NOT where I want to be. I can't keep getting up long before dawn, working without a break most of the time for up to 9 hours straight, hobbling home and collapsing in tears, then attempting to take some time for school and myself before collapsing into bed for my scant few hours of "rest." It's wearing me down to nothing and I can't afford to go on like this.

Well, that was cathartic. Going now to make tea and probably eat some more.

Posted by Unknown at 3:02 PM No comments: Links to this post