The best way to start the day

...would actually be waking up next to that 6'2" better-than-an-electric-blanket heat mass I call The Man, but this'll have to do. 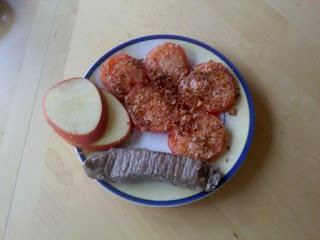 Coconut-crusted tomatoes, a few slices of Honeycrisp apple, and MEAT.  I've decided that trial and error (mixed with some book larnin' for when I just have NO idea what to do) is the way to go when it comes to figuring out how best to char the previously-living flesh.  That said, this bout was kind of error.

I bought London broil (what the hell does that mean?) from WF, sliced it thinnish and then pan-fried it with coconut oil til it was brown on the outsides and still pinkish in the middle.  Unfortunately, I figured out that this particular cut is pretty damn tough when it's sliced with the grain (as the piece above is).  Lots of gnawing ensued.  But it still tasted fine!  Coconut oil is the BEST.  Maybe next time I'll slice it against the grain and even possibly broil it, as the name suggests.  I don't think I've ever broiled anything, except possibly by accident.  Thankfully, I have Irma Rombauer on my side.  I will prevail!

The tomatoes were actually pretty awesome, although the recipe definitely needs some tweaking to be really perfect.  All I did was slice them thick (index-finger-width), dry them off a bit, dip them in dried, unsulphured, unsweetened coconut (swish them around to make sure all the crevices get filled) and fry them for a few minutes each side (in coconut oil.  don't you know me by now?).  I also added a little sea salt to one side as they were cooking.

I think I was subconsciously craving fried green tomatoes when I made this.  Compared to that, it's meh, but in its own right, it's not too bad.  I think I want more weight to the "breading" next time, and a little more savor - maybe mix it with a little almond flour, with herbs and salt added right in instead of as an afterthought?  Maybe bake them, so the crust doesn't all fall off in the pan (which it actually didn't nearly as much as I thought it would)?  And if I can find real green tomatoes (not for a while yet) it would pretty much be heaven.

Lurkers: Coconut and tomatoes is a really strange food combination that causes people to look at me askance.  What's a combo you like that's not necessarily "normal?"