I had been thinking about the topic of my last post for a long time before I wrote it.  The culmination was simply that day when I kept whining about being scared and weak like I had been for freaking ever and suddenly got all meta about it.  But it had been in the back of my mind for some time, and I kept half-thinking that it would be kind of a cool idea to act on that quote from one of my namesakes:


"Do one thing every day that scares you."

At first, when the idea emerged, I thought it would be too unrealistic and unsustainable - I'm not scared of THAT many things, right?  Um.  Well.  Upon reflection...yeah.  Below is a partial list of just some of the stuff I can think of right now:

I can give you an embarrassingly large number of other examples...but you get the picture.

So now that I have the fodder, what's the plan?  It's dazzlingly simple: take the words of that other brilliant Eleanor at face value, and do (at least) one thing every day that scares me.  It could be something as small as attempting to walk backwards up the wall into a handstand, which scares the ever-loving piss out of me because my brain suddenly screams "OH MY GOD THERE IS NOTHING BENEATH YOUR FEET YOU ARE GOING TO FALL OFF THE WORLD" and then I fall over.  But hopefully that's not going to happen.  It could be as big as planning a solo overseas trip, which stupidly enough scares me way less than the thought of being inverted.  But at least one thing.  Every day.  Doesn't have to be unique, just has to get the butterflies going.

DAY 1:  Today I hollered at a class of 60+ people to shut up while the professor was talking.  And when I say holler, I mean holler.  I can be loud when I want to be.

That's all for now.  Keep me honest, people - bug me if I don't post.  Yes, I mean that seriously.

-N
Posted by Unknown at 8:30 PM No comments: Links to this post

So last Friday, I headed to Chapel Hill to ape it up for a while.  As it turned out, my ape sensei for the day was not the Caveman Ninja, but someone else, equally as cool, but apparently moving to the fricking Swiss Alps, like, yesterday.  And amid all the jumping and rolling and whatnot, I found myself saying, over and over, some version of "I can't do that because I'm too weak and/or scared."  Even though I actually did go through with a lot of the stuff, I feel like I wasted the opportunity to learn as much as I could have because I was too caught up in what I couldn't do (at least, what my head told me I couldn't do).

Then I realised...that's been pretty much the defining factor of the past year (at least) of my life.  Fear.

It's not that I've failed to accomplish anything.  I got back in school, aiming for a dual degree in physics and engineering, and finished the first year with only one B.  I found my own place - a nice little duplex in Durham, less than two miles from both my main workplace and school.  I handled 65-70 hours of work per week over the summer and saved up a small chunk that should come in handy in the future.

But...I also neglected my physical fitness.  A LOT.  I stopped going to PT ostensibly because it was too expensive, but also because it hurt so much, and I was afraid of the pain.  I didn't start back up with training when my body could have handled it, because I was terrified of hurting my shoulder again, and because I was ashamed of being the weakest person there.

That's how it started.  I feel like that physical weakness and fear of pain transferred over into other aspects of my life, and made fear the main motivator.  I studied hard and got good grades because the spectre of failing at school yet again and thereby damning myself to a life in shit jobs constantly hovered over my shoulder.  I blinded myself to the bad and spent all my spare time trying the same bad fixes on relationships that kept not getting fixed because I was terrified of being alone in a big scary world for the rest of my life.  I worked so ridiculously much because I felt absolutely certain that if I didn't, I wouldn't be able to make rent and feed myself and would have to live in my car and probably get hassled by the police or possibly mugged by someone who would creep up and slash my tires at 3am and then just wait, laughing and sitting on my hood while I pissed myself trying to dial 911 but my phone would be dead.  That's how my brain works sometimes.

Some might say that it doesn't matter what your motivation is if you accomplish your goals in the end.  I think that's bullshit.  It's the same kind of effect that a lot of women get from trying the "motivation through shame" sort of transition to a healthier lifestyle: take a picture of yourself in a bikini or underwear and tape it up on the fridge or near your exercise equipment,  using that (presumably disgusting beyond words) image as negative motivation to eat better and exercise more.  The problem with that is the constant, poisonous inner monologue it can create, endlessly repeating how YOU ARE NOT GOOD ENOUGH...and you never will be.  You might lose weight and look hot to others, but the voice will remain, and it's a tough sonofabitch to evict once it's in there.  I know this.  There are still times when I have to literally smack myself in the head and say "shut UP!"  Usually this is a silly enough move to help me get over it already, although it might freak onlookers out a bit.

I recently gave some advice to a friend who was considering the shame-picture method.  My alternative was to buy a cute bikini and use that as the motivation.  It's almost the same, but there's one major difference: with the picture, your motivation is something you're running away from.  With the bikini, it's something you're running towards.  And that small shift makes a world of difference.

I don't want to be simply "not living in my car" or "not alone" or "not weak and in pain."  I want to be actively seeking out a life of amazement and adventure - which, I'm now thinking, might actually include living in my car for a while (or at least out of a teardrop trailer...ideas, ideas!).  I want healthy, fulfilling relationships with interesting people...and I also want the security of being able to depend on myself first and foremost.  As for the pain...I can put up with that if it leads to the ability to hold a weight heavier than I am over my head, and vault effortlessly over a wall...and DO A DAMN HANDSTAND ALREADY.

That's right.  There are a lot of scary things in the world, but one thing that I am still absolutely viscerally terrified of is being upside-down.  And that's going to change.  This is going to be the year of fearing less in all areas of my life, and a sudden (literal) 180-degree switch in worldview is only going to aid that process.

Now, who wants to spot me?

I will never, ever get tired of that view.  It's always exactly the same, and it's always absolutely perfect.

For the past week-ish, I've been in upstate New York, out of cell phone and GPS range and only around wireless once to send some emails.  So basically lost to the rest of the world, and it was FABULOUS.  Here's a basic day:

7ish: wake up, lie in bed for a while marveling at the fact that I have absolutely nothing that I need to do.  Eventually roll out of bed and don my swimsuit.  Grab a cup of coffee and a towel and walk down the hill to the lake.

8am-dinnertime: swim, lie in the sun and get dry, swim again, walk barefoot through the woods over a century-old carpet of pine needles, go for a quick paddle or row across the lake, head back up to the camp (that's Gahadaese for "house") for some ridiculous dinner made by my wonderful uncle - something like grilled marinated lamb.

9ish-the wee hours: campfire time!  Shooting the breeze, jamming, taking an impromptu trip across the lake at 2am to see what the creepy light that appears there sometimes is (and then turning around before we got there because SOMEONE who happened to be rowing got skeered), roasting marshmallows, midnight swimming...and then finally picking your way back to camp barefoot in the dark to fall asleep and do it all over again tomorrow.

I spent the entire week barefoot, only slipping on my flip-flops a couple times but always kicking them off again before too long.  I sang with some old friends who are now incredibly good at guitar for a talent show (although our jam session earlier was miles better because I'm not used to microphones), danced for several hours straight at a square dance that also included multiple playings of "The Electric Slide" and wished it could have been twice as long.  And every morning I walked down to look over the lake, at that view that's been refreshingly unchanged ever since I first saw it as a baby.  Forget Paris. As long as we have Gahada, I'll be one happy camper. 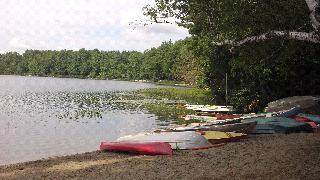 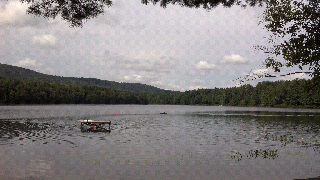 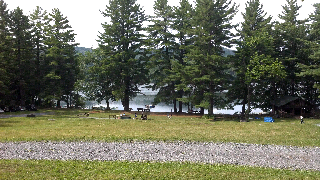