So yesterday, I forgot to bring my shoes to Crossfit. But it was ok, because we did barefoot running form practice! 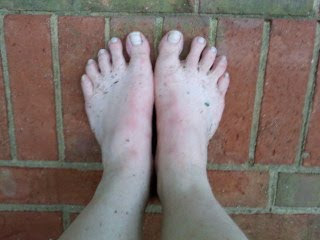 Someday, these feet will carry me for miles in all their bare pink glory.

And we also had storytime! You guys remember Colin, right? The caveman-ninja with the pretty blue eyes? Yes? Well, for our warm-up, he had us all gather around him, then began to speak. This is, approximately, what he said. With a couple bits of color added by moi. Natch.

"So this morning I was doing my normal barefoot run through the woods, carrying a couple of fallen trees and hopping effortlessly from boulder to boulder, when suddenly I bounded into a clearing where a mother deer and her fawn were grazing. They were both startled, and turned towards me, all like 'Whaaaaaa?? Human!'(here he mimed the startlement of the deer, if they were bipedal)

"And so I just stopped, and sank slowly to the ground so I was on all fours (continuing the movement), all like 'Nooo, I'm not a human, I'm just a really weird-looking animal!'

"And the deer were all like 'Either that's just a really weird-looking animal or the strangest human ever. Whatevs, yo. This forage is pretty tasty.'

"So we all just stayed there for a while, chillaxing amidst the primalness. And then I started - very slowly! - to crawl towards them.

(here he did what I've heard described as a bear crawl, but the slowest and smoothest version ever, barely making any noise, except for talking, of course)

"And the deer flicked their ears and tails and looked up, but they didn't run, so I just kept crawling (as he did again) until I was about this far (indicating about 6 feet) from the fawn and about that far (15-ish feet) from the mother. (here we are all grinning like idiots at the imagining of the awesomeness overload that is being super-close to a fawn. a FAWN, you guys!!) And we all just sat there for a while until they left. Then I sounded my barbaric yawp and swung off through the trees, Tarzan-style.

"So, guys, for your warm-up, you're going to crawl just like that."

Dudes et al, this was insanely hard. The way I normally do bear crawls is basically a barely-controlled fall, sticking out my hands just in time to save myself from a nasty faceplant, then repeating the process. But here we're balancing on alternate hand and foot in a near-plank pose most of the time (or should be), so there's some intense core work going on here. It was incredible! Try it out!

The WOD was as follows:
The idea was to fatigue us and still have us be able to control our bodies well enough not to kill ourselves on the hops. I still have to do little mini-hops in-between the big, over-the-bar ones just to catch my balance, but I'm working on that.

We finished much earlier than he'd thought (I was at about 11 minutes, not pushing myself to the limit to avoid cramps), so we spent the rest of the time out back practicing running. I'll do a post solely on that at some point because it's pretty damn cool, and deserves its own space.

Here are a couple of dinners I've had these past few days. I've been focusing on my body - when it gets hungry, when it's merely thirsty, etc - and have found that just snacking on fruit or veg and nuts (almonds are the food of the gods) during the day keeps me feeling the most alert and leads to the best workouts. However, it also means I make enormous dinners to make sure I'm getting enough for the day, which is why these are all rather large and/or fat-heavy. And yes, all of it gets eaten with great gusto :D 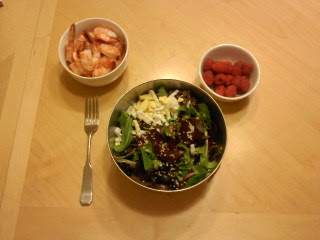 Last Friday: a big ol' salad, with an egg, olives, part of an avocado and plenty of EVOO-heavy homemade dressing; stir-fried shrimp in more EVOO; and these are only some of the rasberries I had. 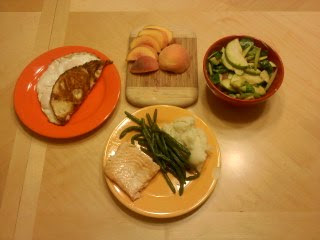 I think lately I'm enjoying my meals more than I ever have. I'm sure it's at least partly the demi-fasting I do during the day that makes all the flavors just burst on my tongue (as well as the fact that I use a TON of fat in my cooking now just to ensure that I'm getting enough calories for the day. mmm...fat...), but everything is just so incredibly delicious! I'm also starting to get my energy and mental facilities back after the intial training-my-body-off-grains period.

And I feel FANTASTIC.