Eleven Goals Not Based On Weight (slightly NSFW)

I've been thinking lately about my renewed resolve to ignore the scale.  I don't care to tie my view of my health to a number that's so wildly variable.  And as much as I try to focus on other markers, the feelings associated with specific numbers are insidious - I can't ever seem to forget that the proper "healthy" weight for a woman my height is somewhere around 135-142, even though I know I'm carrying a hell of a lot more muscle than average and the number's probably skewed to start with.  I don't like feeling gross when I realise that my weight is nearly the same as my 6-foot tall male friend, when I should be reminding myself of the fact that my bench press is considerably closer to that number than his is.

So the scale is out.  Problem is, it's probably the easiest marker of progress to track with any objectivity* - I can go just by how my clothes fit, but it's hard to quantify that.  Solution: come up with other goals.  I tried to make a mix of both appearance/body-based goals and ones based on awesome things I want to be able to do.  Which is of course all that matters in the end.  But I'd kind of like to look hot while doing them.  These are very roughly in reverse order of want, meaning #1 is definitely #1 but the rest are just thrown about. 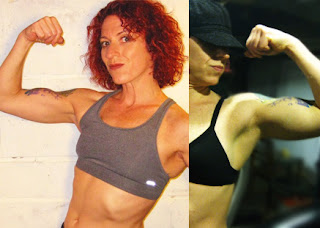 ...meaning not only totally beasting it, but also sporting pretty pretty tats.  If you haven't read Batty's blog, you need to go over there and do it like NOW. I yoinked this particular pic from this post, which I absolutely love and advise everyone to bookmark the page.  This is the one I used to convince a beautiful healthy teenage employee of mine that she really did not need to lose 20 lbs, nor should she ever shy away from being strong and capable for the sake of some twisted, narrow image of "beauty."  And it worked.  Yay Melbell!

Useful for climbing walls, escaping the bad guys and generally being a ninja.  Impressive as all hell.  What's not to love?

9. Get to 22% body fat
No matter what my size, I've always been proportionally bigger in the regions of T&A (the former more than the latter, but both overall).  I figure 22%, mixed with the fact that a lot of that is going to stay with Ralphie and Louie, is probably low enough to give me abs while staying totally healthy.


Again with the getting-away-from-bad-guys.  This one's an especial dream of mine, as it was the one move in the Fundamentals of Parkour class with Colin that I really couldn't even begin to do, reason being that my shoulder slipped out of joint the first time I tried it.  That's an ongoing problem that I'm finally taking care of - I actually got the arthrogram and MRI of my shoulder done today...which is why I'm inside writing instead of at CFD doing presses.

7. Have that line down the middle of my abs 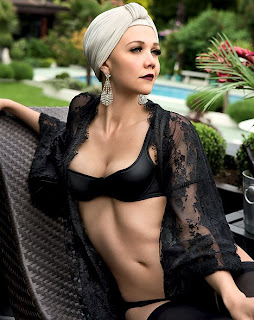 I'm not asking for a full-on six-pack, but I think the look of this is really nice.  Plus, it's Maggie Gyllenhaal in Agent Provocateur.  No one loses here.

6. Run a 7-minute mile.  Preferably barefoot.
I've always been a distinctly "meh" runner.  Not too great at either speed (except for really, really short bursts) or distance (I doubt I've ever gone more than about 3 or 4 miles at one time, ever).  But it's useful.  And fun.  And apparently we're all designed to do it.  So yeah.

5. Have dimples of Venus
You cannot tell me that's not hot as all hell.  Even with the plumber's crack.  Or maybe even more so because of it, depending on your taste.  Right now, I can feel where those are supposed to be but I can't quite see them yet.

4. Do a freestanding handstand
...unless my spotter is a young, shirtless Sean Connery.

3. Have a perfect 0.7 waist-to-hip ratio
Simply put, it's the universal, evolutionarily-ordained marker of human feminine attractiveness.  For a bonus, try and name all the ladies shown above.  I got three.

2. Deadlift 300 lbs
That's a hell of a lot.  Almost twice my bodyweight.   For a lady, that's pretty damn decent.  It's also an enormous number that I can brag about.

And the number one thing I'm working towards... 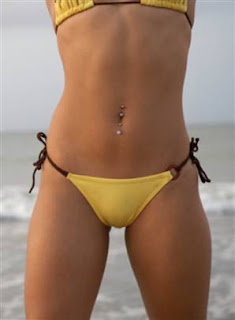 THIGHS THAT DON'T TOUCH!
Partly to look good.  Mostly so I can actually buy nice jeans and pants and not have my monster thighs shred the insides of them within months.  This has happened to every single pair of real pants I've ever had, and some of the stretchy ones too.  When I'm pantsless, I love my thighs and what they can do (just ask The Man, wink wink nudge nudge).  But any other time, they are literally Why We Can't Have Nice (leg-covering) Things.  And they chafe.  Ow.

And there's my list.  Hope you enjoyed it.  Comments?  What would you use for your own?

-Nelly
*since I still can't find the damn tape measure.
Posted by Unknown at 3:11 PM