Good for what ails ya

Last night was an absolute BLAST, thanks to the incomparable Ms. Amy Scott, the hostess with the most-ess.  Watermelon (which I have been devouring like a fiend lately), guacamole and grapefruit juice + pineapple vodka to start the night, and cornhole, hula hooping, impromptu tango and swing dancing (not to mention the Cleveland Shuffle) as well as 90 push-ups and 20 burpees by the end of the whole shebang.

Side note: apparently I have "balletic" burpees.  Who knew?  But thanks, Jed :)

And that is why CrossFit parties rock harder than any others.  Although next time we try to film the process, we might want to have a couple more of the classic filming essentials.  Like, you know, light.  Yes, Ashley Thompson Denton, I just called you out.

Here's the link to see the vid on Facebook.  If you can't see it you might have to friend me; just drop a note about why you're doing so along with the request so I know you're not a random creeper.

And then today we all got together and did this crazy WOD.  Check it out:

15 minute AMRAP* of
Rest for 5 minutes

15 minute AMRAP of
The deal was that you'd team up with one or two other people, and you'd complete an entire round, then rest and cheer while your teammates did their rounds
I teamed up with Amy and Jonathon Johnson, aka JJ, and we killed it.  Unfortunately I don't know exactly how dead it got because I neglected to write down how many rounds we got.  Amy or JJ, wanna fill me in if you remember?

Then we all got our mobility on.  Coach TCTH** and I chatted about IF - he does it and likes it, because he says it helped him stop being fat.  Which he never was.  So we'll see how well it works for someone who's actually got something to lose.

And then...I went home.  And I made myself THE BEST post-WOD/hangover recovery meal of all time.  OF ALL TIME, ladies and gentlemen.  Check it out: 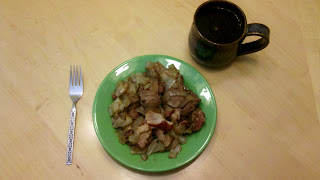 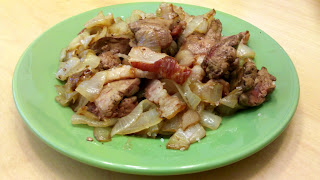 First I chopped up some bacon into little pieces and cooked it.  Then I set it aside, dropped the heat, added a little coconut oil and cooked a whole onion, chopped into strips, for about 20 minutes on low.  Then I dropped in a little EVOO, sea salt and some chicken livers, fried that shit up for a few minutes, added the bacon back and HOLY GODS.  Yes, all of them.  It was just that amazing.

Moral of the story: I LOVE LIVER.  And I had no idea.  Try new things, people.  Worst case scenario, you'll have a cool story to tell at parties.

Upcoming posts: thoughts and research on IF, which I'm probably gonna try starting in the next few days.  Also, wrap-ups of the other two parkour etc. classes I took with Colin.

*As Many Rounds As Possible
**Too Cute To Hate, aka Michael Kelley
Posted by Unknown at 10:41 AM