Why I Wear Short Shorts

Full title that was too long: Why I Wear Short Shorts, Even Though I Don't Particularly Like My Thighs All That Much.

This post brought to you by the Sunday funny papers.
I got up early this morning to run the Duke Wall with my friend/client Vivian, and although I was certain I'd want to collapse right back into bed once I returned, there's something about watching the sun rise while running outside that invigorates you enormously.  So I brewed up some chicory coffee with a little local cream and sat down to get my early-morning giggle fix.  (Pearls Before Swine was especially funny to NPR listeners today, bee tee dubs).

Amidst the chuckles, though, I got a hefty dose of introspection.  Check out what Opal's saying in the third and fourth panels there.  In case you can't read it, she's looking at an old photo album and muses "It's amazing.  At the time these photos were taken, I hated how I looked in them.  But looking at them now I think, wow, I wish I still looked that good!"

Um.  Hello, soulmate?  Well, with me and every other grown-ish woman rich enough to have the luxury of dissatisfaction with looks.


So high school, right?  It's generally accepted, even with long years and large amounts of nostalgia separating us from it, that it sucks.  Everyone is trying to figure out who they are and getting it wrong a lot on the way to doing so.  And, at least for the girls, a lot of that process is about looks.  There are those lucky, lucky few, both boys and girls, who seem incredibly self-assured and even proud of who they are and what they look like.  They walk tall and don't seem to focus too much on appearances, which makes them even more appealing.  They don't seem to have to worry about what they look like or who they are, they just are.

I was not one of those people.

High school was not a happy time for me, at ALL.  I got good grades, but only because I had no friends.  Well, that's not entirely true.  By the end of senior year, I had about five people I talked to on a regular basis, in school, nothing more.  I practically never spoke, unless it was on stage* or required when answering questions in class.  And most of that intense introversion was because of the view I had of myself.

I hated myself, and that's really not hyperbole.  I hated my body, so I wore layers of old and baggy clothes constantly.  I hated my face, so I covered it up with full-face makeup (just foundation and powder, no color - that would just call attention to me) every single day.  I hated my teeth, so I didn't smile.  I honestly thought I was the ugliest thing walking the planet, and I abhorred anything that might capture that for posterity.

Here's an incredibly rare picture of that hideous creature actually smiling, rather than cringing away from the camera, taken right around the time of my high school graduation. 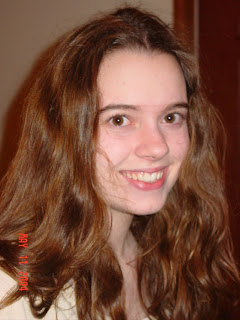 When I look at this picture, it makes me want to cry.  Not from the shame I felt upon viewing pictures of myself back when I was that age - wow, I was so stupid! - but out of the intense compassion and love for that poor, sad, broken little girl who refused to live her life as she should have simply because she had absolutely no idea that she was a complete stunner.  I mean, I don't want to toot my own horn too much, but I think seven years gives me enough separation to say, DAMN!

Now let's talk about today.  I don't hate myself anymore.  I heave a healthy appreciation for all the cool things my body can do, and I think I can honestly say that I like it.  But I still don't think I'm good-looking, apart from a favorably-angled glimpse in the mirror now and then.

Here's the difference: now I KNOW I'm being a god damn idiot.  Mathematical proof,  paraphrased from Red vs. Blue: I take my current age and subtract 10 (or even seven) years from it.  Was I smart at that age?  Of course not!  I was a god damn idiot!  And the fact of the matter is, I'm just as big an idiot today, it's just going to take me 10 more years to realise it.

But yes.  So, even though I still have a lot of the same ridiculous psychological hang-ups about my body and my looks, if I continue to let it affect how I live my life as I did back then, I will be just as heartbroken in 10 years, thinking about the girl I am right now.  And I don't want to make Future Me sad.  So that's why I'll cheese it up for the camera, even if I'm completely un-made-up and even though I still haven't gotten braces.  And I'll pull on those short shorts and rock the hell out of them, as I run miles in my bare feet and lift well over 200 pounds.  In fact, I'm on the search for a pair with "BAMF" written on the ass.

Love yourself now, because if you don't you will smack yourself later.

*Theatre was the only exception to this rule.  It's much easier to be yourself when you're someone else.
Posted by Unknown at 6:16 AM