A good way to start the day 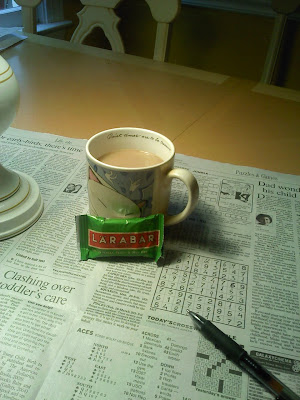 Coffee with whole milk and an apple pie mini Lara bar. And Sudoku which I finished in about 5 minutes flat. And also a crossword that you can't see.

So I'm going to start posting pictures of my food again. I've really fallen out of the habit for a while, mostly because my "normal" meals these days are invariably sardines or eggs, a big plate of veg that while delicious is still pretty ugly, and lots of almonds. And also more than a few pinches of cookie dough while I'm at work, which is not exactly something I want to show off by providing photographic evidence. But I know I still should.

And I do really kind of miss the whole...ritual, I guess you might call it, that was setting up my meals for the photo. Getting out the nice plates and silver, cooking a good balance of colors and textures for visual interest, making everything look just so. I found that, at least for me, it was often the effort that I put into getting a good shot for this blog that made the difference between running around mindlessly munching (and then snacking on more later) and actually literally sitting down to eat and paying attention to the fruits of my labor (and thus being more satisfied with just that).

So yeah. I'm well aware of the danger that is becoming over-obsessive about food, but it seems like this is one minor obsession that's good for me. Keep posted for more pictures from here on out!

Question for the lurkers: I want to start posting more frequently in general, and a way I've seen a lot of bloggers manage this is to create daily categories, like the money check-ups every Monday from Grace, Alyson et al, or Sylvan's Ten Things I Love posts (which aren't scheduled but still a category), or JPC's Spirit Sundays and Wordless Wednesdays (the latter I especially love: she just posts one particularly beautiful photo that she's taken recently and invites all the readers to simply revel in it with her). I've joined in on the Money Mondays idea, but what are some other ones you'd like to see me do? They should tie in with healthy living in some way, shape or form, but that's pretty broad :)
Posted by Unknown at 6:53 AM