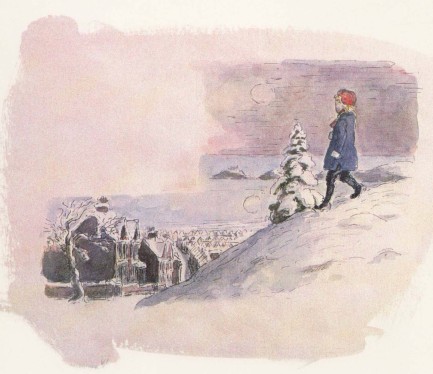 I was a Christmas orphan this year.

I'm not going to lie - at first I was pretty bummed about it.  Not that you'd have realised it, seeing me anywhere in public, though.  During my last work shift, on December 23 (Christmas Eve Eve, for those in the know) I was acting as cheerful as you can get without actually glowing. People just kept coming in and everyone could see we'd have to stay later than normal and my buddy Pepe was tired and misanthropic and we all just wanted to go home already.  So in retaliation against the wave of Grinch-like ennui sweeping over us all, I did my best to be as happy as possible - smiling even wider than normal; singing along to the radio; joking and laughing with customers, cooks, runners and all.

And I kept it up even after the place  was closed and empty and the cooks had gone home and it was just the last FOHers cleaning up.  The radio was off, so I started singing all those beautiful ancient Christmas hymns that I still love so much, even though it's been years since I ascribed to the belief.  The sanctity of the music itself, one note after another in precisely the same way it's been done for hundreds of years, is enough for me.  I sang Dominatus Ex Parentis (although I had to switch to English because I don't know the whole thing in Latin), and Un Flambeau, Jeannette, Isabelle and the Coventry Carol and Lo, How A Rose.  And some more, but it was the last one that got me.


It's the one that my sisters and father and I always sing together, and after years of playing around with the song, the harmonies that pour from our mouths are effortless and lush and more than my normally too-humble self can easily describe.  And with my sister, the newly-married lady, on her way to Colorado, it hit me that it may never be that effortless again - that every rendition from now forward is going to be heavy with the thought that we are no longer a close-living family and so every time we can sing it together, the song will be tinged with the desire to make the brief time count as much as possible.  I know I'm being maudlin.  But it was Christmas Eve Eve, and I was hundreds of miles away from my family on that day for the first time in my life, and when you're sweeping alone in a large dark room with the sound of sacred, ancient music playing in your head, it's almost a relief to cry.  Especially when it makes even the misanthropes want to comfort you.

Christmas Eve Day was spent doing errands and cleaning house and in a long, slightly soggy walk by my river.  And when dusk began to blur the edges of the day, I retreated into the nest of my cozy little living room and turned on all (two) of the lights and grabbed my kittens and attempted to chase away the dark by staying put.  And it didn't work.  So I left the kittens curled together on my pillow and quietly let myself out into the night.

The plan was to go around town and see all the Christmas lights, possibly ending up at this one house that puts on an absolutely mad display of flashing lights that are synched to the music of a particular radio station.  I saw a bunch of lovely lit-up houses and some that were slightly over-the-top, but never found my way to the neon shrine of energy consumption that was my stated goal.  Instead, I found myself on the highway, going north, listening to Christmas stories on NPR.

When I conjure up the memories of my childhood, they play out on a number of stages.  The woods behind my first-remembered home appear often, with the natural rope swing made from a looping vine, and the hills, steep and rocky as cliffs to me, that we called the Andes Mountains.  My grandmother's house in Cleveland is there, with its tall kitchen counter and chairs where we'd perch and sip cocoa.  The most beautiful place in the world shows up, hiding in the mountains of upstate New York and unchanged in 26 years of visits.  But also, probably more often than any single location (at least in my earlier years) is the scene of driving down the highway at night, with everyone else in the car sleeping except my father, listening to the radio or his Paul Simon tapes very quietly.  I'd stare out the window and make up endless stories where I ran through the same dark and dripping woods flying past my window, the notorious girl in the wild (adopted by the wolves when she was a child), or climbed the striated cliffs that rose like bombed walls around us through the mountains, or even trudged through the soggy landscape of the clouds, so close and detailed that I remember them as a continuation of the land itself and not a separate element.

I drove and drove on, with barely anyone else on the roads to tailgate me for going 15 under.  And as I drove, the radio took me to the fields of France in 1914 where in two tongues one song filled up the sky, and in the middle of a tangle of wolf cubs under the snow, and in the living room of an ancient Southern matriarch, lit only by her exquisite Christmas tree, and in the garden of a poet, living out her last years alone in a house overlooking the Maine coast.  And she reached out her hand and took mine on the steering wheel and told me " Solitude is the richness of self, and loneliness is the poverty of self."

And I turned the car around.  The notorious girl in the wild reversed her footsteps and ran back over the dark hills toward the lights of town.  When I unlocked the door and pushed it open, there no longer seemed like there was a need for more light than the orange glow of the streetlight falling through the blinds, so I turned the others off.  I tucked myself in.  The kittens curled behind my knees and my neck.  I said some words to the close and holy darkness, and I slept.
Posted by Unknown at 9:29 AM