Some of you will know what this crazy long word means.  High five, sisters/brothers/other fake family members.   For those who don't, it's essentially the nervous habit/compulsion to pull out one's hair, officially classified as an impulse control disorder but sharing a lot of traits with OCDs, addiction, and tic disorders, as well as being obviously similar to compulsive nail biting and skin picking  so that they all are beginning to be thought about as part of one group, body-focused repetitive behaviors.  More info can be found in the Wikipedia article, as well as trich.org, which should also provide a lot of help to anyone who needs it.

As I've talked about before on this blog, I have it.  Have since I was a young teenager.  I don't remember why I started, just that our cat Gracie had this thing for biting through strands of hair held taut between your fingers, so that's what I did with it.  I also bit it between my front teeth, which is called trichophagia and refers to eating the hairs, but it was more of an auditory/sensory thing, with the strands of hair sort of clicking and giving way as I bit down on them.

Yes, it's gross as fuck.  I thought so too, so much that I lied about that particular detail to the therapist who was supposed to be helping me through these issues a decade ago.  And I'm done with that.  One of the main reasons I hid it for so long and let it get so bad was that I thought I was a disgusting freak who was just too stupid and weird to stop this obviously nasty, ugly habit.

And...I'm not.  I'm nowhere near that.  Estimates are that around 3-4% of the adult population has a problem with trich.  That's like one in 30.  That's not freakish.  It's not a great habit to have, but it's absolutely not as weird and abnormal as I thought it was back when I just hid under hats and carefully-combed and -pinned hair to hide the bald spots.  And if you, dear reader, have this same issue, that's the first thing you need to realize - you are nowhere even CLOSE to alone.  Other people deal with this every day, just the same as you.  Other people have fought it and beaten it and backslid and tried again and tried new things and just kept on trying.

So that's what I did.  After more than ten years of managing my trich, to varying degrees, I still had a patch on the back of my head.  It wasn't a huge one - maybe the size of a half dollar, if you kids even know what that is these days.  I could hide it if I tried - just comb the hair over it and put some gucky stuff in when it was wet, and then try not to touch it.  But that never actually worked for long.  Stress kept happening, and  my automatic response is for my hands to fly up and start pulling.  And it wasn't stopping.  So... I decided to shave it.

So I'm gonna stop typing now and just show you the video. 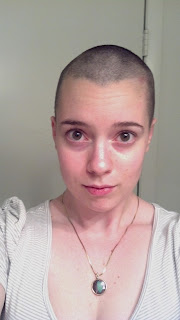 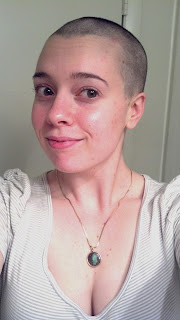 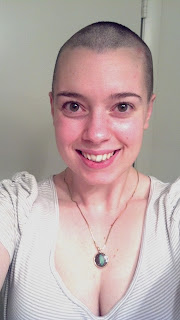 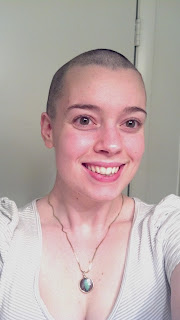 Yep.  A picture is worth a thousand words, so Colin (who did the marvelous editing job) could probably tell you what the frame rate on that vid was and then multiply that out, leaving anything else I thought of putting here a little pale in comparison.  If you have any comments or questions, either pop them in below or feel free to email me directly.

More to come soon about the responses I've gotten.  They are many and varied.  Best part: black belts now openly fear me.  No actually, best part: little girls who loved my rainbow hair also love my pettable short hair.