I'm no stranger to odd cuisine.  As a matter of fact, I usually tend to seek it out.  Working where I do definitely helps with that - at the restaurant, I've had Rocky Mountain oysters (aka bull testicles), home-cured sausage of various kinds, pork skin (trimmed from a hog carcass and saved to take home, where I rendered the fat off it and then fried up the other bits) and whatever else the chefs want to feed me.  On my own, I've had beef heart, liver (very rare is best) and kidneys, steak tartare, carpaccio and colostrum so much that they no longer seem at all weird to me.  But there are still a LOT of things in this world to eat.  Here's one of them:

ATTENTION VEGETARIANS AND THE EASILY-NAUSEATED: DO NOT CLICK THROUGH.  I'm not joking.  It gets worse.

I'm not going to lie, the first sight of an entire pig's head (shrink-wrapped; eyes still there) in our meat order the other day was just a little unnerving.  But only for a second or two.  At T = 0:03, I was all "Whoaaa!" and poking the snout (oddly gelatinous-feeling) and talking to Chef Tess about how to make head cheese - basically, boil it until everything falls apart, then take out the bones and everything that didn't fall apart and grind everything else up and squish it into a big lump.  That one's on the list.

This time, though, Boss Of Beer was making this French thing that's basically like a buche de noel...of pig face meat. You boil the thing for about three hours, then separate the skin and fat from the meat, layer it like a jelly roll-up with the fat and skin on the outside, and roll it up.  After a few hours it solidifies and you can slice it up like sausage and do whatever you want with it (preferably eating).

So it boiled away, three feet from my station, for three and a half hours.  With the veggies, fennel, ginger and other spices Seth put in the pot, it smelled amazing and was SO distracting.  Whenever anyone walked by I'd show them, and we'd each grab an ear ("Hey, can you make a purse out of this?" asked BOB, multiple times) and pull it up for a better view and make various amazed/grossed-out noises.  And EVERYONE pulled out their phone and started snapping pictures as soon as they saw it.  After a while it really started to break down ("Oh hey, the face is really melting now!" said Chef Tess) and that got a little bit disturbing, but still made me hungry.  I'm starting to think I'm not normal, and I'm completely happy with that fact.

So finally it was done.  The whole thing came out of the pot and they started to break it down.  Oddly enough, the teeth were still pretty firmly embedded in the jaw, which may have been what convinced BOB to declare that we would save the skull and bleach and dry it and put it up on the wall in the kitchen.  Have I mentioned that I freaking love my job?  But yes.  On to the real purpose of this post.

So besides the fairly normal/palatable fat, skin and meat, there are a lot of other bits that get thrown away in this process.  Namely... 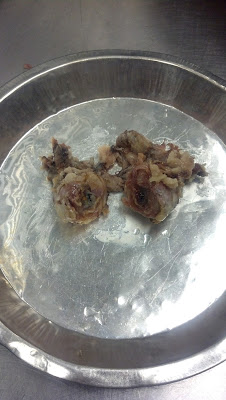 This is what they look like when they're still fairly recognizable as organs.  I forgot to get a picture when they were...er...peeled.  But most of what you see there is just what surrounds the eye.  There's a thick white cord going through all that mass to the back of the eyeball - that's the optic nerve, which has to be removed. And everything around the eye is mostly just chewy fat.  But the eye itself, once peeled, looks like a reconstituted really big raisin, or some kind of gummy fruit thing that you know is really really not fruit.  The whole thing goes black once it's cooked.  And...I ate them.  Kind of nondescript, really - a slight gummy texture, and not much taste other than the stuff they were cooked with.  But yeah.  It happened.

And so I'm starting a new mini-section of PFL, which is "Eat Something F*cking Crazy."  On the list of things to try so far: that dish with the cooked-in-the-shell almost-ready-to-hatch baby chicks, that fermented Roman fish sauce my dad won't shut up about and sweetbreads.  Commenters: give me more suggestions!