Ah, tri-fold mats.
This guy - or at least a creature very closely related to it, as this one looks prettier - was, up until last week, all the couch I had.  And, up until last month, all the bed I had.  Surprisingly comfortable, in fact, and I swear my posture was better.  But I digress.

Normal people don't like to sit on the floor all the time.  And while I was perfectly ok with sprawling around and letting the kittens clamber over me, I realised that if I ever wanted to actually have friends over, I should probably have something a little more conventional, or at least a little more elevated.  Something like...


Early morning sunlight, a nice hot cuppa joe and the inspiration-conducive atmosphere of Local Coffee Shop (where I've been going for internet lately) got my muse on her hamster wheel, and this came out.  It's based around the dimensions of the aforementioned mats, of which I have two - hence the double-bench setup.  I raced home, whipped out the old (no seriously, it's falling apart) tape measure, and got dimensions, then figured out approximately what I'd need, lumber-wise.  And then, to Lowes.

(If this post seems like it's leaving out a lot of detail, it's because I kicked time's ass on this project.  Just saying.)

When I got to Lowes, I was directed to Kyle the Extremely Tall Lumber Expert.  He and I went over my rough plans for the actual structure: 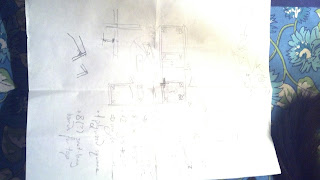 He pointed out some areas where it would be beneficial to have more stability, but said that overall it was a good solid set-up.  Got the lumber, took it home and laid it out in place on the floor, put out a request for a power drill/screwdriver on Facebook and skedaddled off to class.  Efficient and Driven Nelly is efficient and driven!

My buddy Master Of Robots has a drill/screwdriver and bit set, which he lent me and I started piecing things together.  It's like a giant puzzle.  Made of wood.  With very few pieces.  This is how it looked after about an hour: 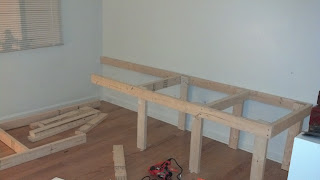 Notice that it's really kind of tall, as in more of a clamber-onto thing than a sit-down-on thing.  I'm pinning that on Kyle.  The one thing I shouldn't have trusted him on was his recommendation that the legs be 24" long.  Did I mention he was incredibly tall?  24" was probably just up to his knees.  Thankfully, Master Of Robots also had a saw, which I borrowed the next day and put to use.  With the sheeted mattress on for a sense of how it would look at completion, here's another view: 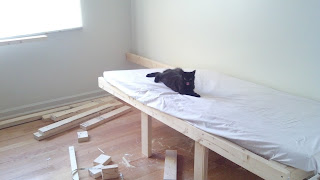 You can see the left-over leg ends there on the floor.  Featherweight Mina loved it already, but Tam (who's just a tad more hefty) caused it to sag suddenly when he jumped on it and scared himself.

With one side pretty much finished and the general structure modified slightly from the plan to space the braces out a bit more, the other side came together even more quickly.  One of the long boards was a little warped, so I had to end up fudging it a little, but the bench portions are solid enough to stand alone, and only connected by about two screws, just to keep everything from moving.  Finally, the day of my Soup Party (which will be detailed in the next post), all that remained was to add some kind of a surface to lay the mats on.  With about an hour and a half left, I zoomed out to pick up plywood, then raced back home and attached it.  The first guests were walking in the door as I sheeted the mattresses and put them in place, but it was my mother and my very old friends the Murrs, who are kind enough not to care (as would be all my friends, come to think of it).

So then it was (pretty much) done.  And it  is (look away, Mama) fucking AWESOME. 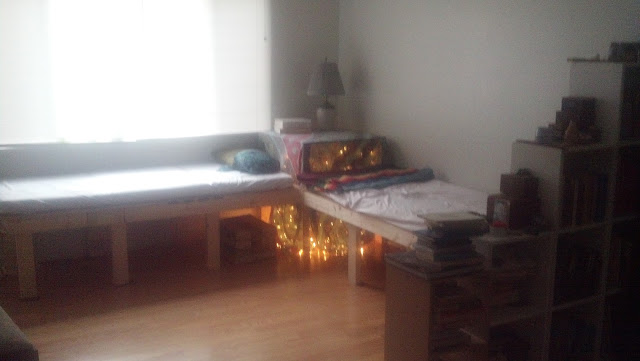 Now, here's the cool part.  I didn't think I could do this.  With previous building-stuff experience, I was led to believe that my designs would always be missing something here or not refined enough there, and I was stupid for putting them together like that.  I would get really upset at this and pout like all hell, which is admittedly not the correct response.  But...my designs do work.  And if there are parts of them that don't, I can figure out how to modify them on the fly so that they do.

And that's really what this whole PFL deal is turning into.  Before, I had the horrible habit of non-action whenever I was the tiniest bit unsure about something.  Now, if I think something is a cool idea (building a couch, being a model, going to a new place in town, etc etc), I don't let my brain trip me up long enough to stop me.

Fear less.  Live more.  That's what it's all about.