This is how it ends: 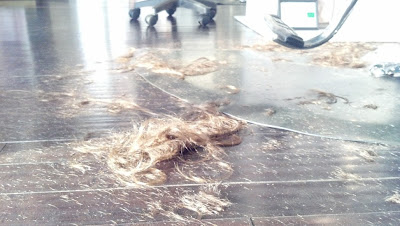 This isn't the first time I've done this.  In fact, I think it was even shorter last time.  But this is the first time that I bawled like a baby in the hairdresser's chair.

Let me explain.  I have trichotillomania.  It's an OCD, characterized by the compulsion to pull one's hair out and/or pick at any little zit or blemish.  Basically it works like this:

Me (this past summer): Damn, I'm bored here in lab.  And there's nothing to do except keep running tests of my program and watch each of them go through at the limping snail's pace that is debugger speed.

Brain: Hey, maybe you should pull that hair out!  Yeah, the one that's all weird and crinkly!

Me: Hey, it is kinda weird!  Yeah, I'm gonna do that.  And now I'm gonna take a five-minute break to run around the building and jump on benches instead of pulling any more hairs out.

End scene, because at that point that method still worked.

Later on, by which I mean pretty much any time over this past month-ish:

Me: Gah, I'm kinda stressed from being in full-time school while I hold three jobs and deal with being newly single!

Life: HERE IS YOUR GRANDFATHER DYING.  I'M THROWING IN TWO CAR BREAK-INS JUST BECAUSE I LIKE YOU.  LOL NOW YOU HAVE TO MOVE.

Brain:  Hey, maybe you should pull ALL YOUR HAIR OUT.  Don't stop with the weird ones.  Just keep on frantically plucking them out.  No one needs to find you pretty - you're single and an engineering student, who the hell are you kidding?  Just keep pulling.  And any real or imagined tiny little cyst or blemish anywhere on your body?  It is bad and evil and you need to dig it out of your skin by any means or implement necessary.  Do it.  DO IT NOW.

I believe I've mentioned before that my brain is kind of a dick.

So I started fresh.  My hair wasn't looking super ridiculous and patchy yet (as it has gotten before), but the habit had gotten to the point where if I hadn't done something drastic, it would have been really really bad.  And please don't try to give me kind advice about different methods I could have tried unless you have it too.

Like I said before, this isn't the first time I've chopped all my hair off.  The difference is that this time, I really thought I would be able to grow it out long again.  I tell people my hair used to be so long that I could braid it and then sit on the braid, and I can tell they just can't picture it, because I've had short hair for so long that it's all anyone ever knows of me.  But this time it was just getting past my shoulders, and it was soft and shiny and looked pretty spread out on the pillow when I took it down at night (it was always in a tight, pinned ponytail during the day, mostly in an attempt to not pull) and my kittens liked to lie on it and make biscuits.

To be a woman with short hair, you really need to be able to pull off a certain kind of attitude - confident in her abilities and sexiness; outgoing; doesn't take any shit, et cetera.  That's another reason I cut it - I really need that kind of an attitude these days, and when you wear the mask, you tend to take on the personality.  I don't think my chin has been consistently higher than it was today in quite a long while.  But...I really just wanted to look pretty again.  Hence the crying.

But anyways.  It's done.  My hair is gone, and I have nothing to hide behind, so I damn well better act up to that.

Here's the last picture of me with longer hair, taken this past weekend when the girls and I went out dancing:


And here's what it looked like two minutes ago:

This is me, guys.  No makeup, no hair, no freaking clue what I'm doing most of the time.  Just trying to make some good stories.