I told my landlord that I'm moving out.  There's a list of reasons:


There are also soft spots in the floor and ceiling and hookers right around the corner.  It's not the best place to be, all things considered

But it's still pretty scary to make it real.  I have a deadline to leave (admittedly a generous one), but I need to find a new place and pay for it and pack everything up and transport it over and unpack it again and build a couch because the one I have now came with my current place...actually, that's one of the fun parts.  And also having doors on rooms, that'll be a good part too.  And being able to put up all my pretty artwork as I was hesitant to do before because it might get burgled away from me.  Ok, so this is overall a good thing.  It still got the butterflies going to actually send the email, though

I emailed that one dude who tried to teach me some ape stuff way back when in order to thank him for unknowingly motivating me to do this whole project.  This is scary because I don't normally talk to people who don't talk to me first, even in text on a screen.  I also don't usually tell people when I think they're awesome because I think it'll seem like fawning.  Especially guys, because then I'm afraid it'll seem like flirting.  I'm actually afraid to flirt.  On the one hand, you get rejection, and the other, it actually works, which is even scarier.  Anyways.  Sean, if you're reading this, feel lucky.  The only other person to get a fan letter from me was Sting when I was 14.

I asked Colin to teach me, at some point in the course of my martial arts/self-defense classes with him, some techniques to counter the type of moves that I, as a woman, am more likely to have to deal with - namely, getting grabbed and/or backed up against a wall, to start with.  THIS IS TERRIFYING.  The moves themselves aren't all that different from what we've covered already, but the psychological side of it gets me tense and shaking after literally only a few seconds with my back to the wall.  In opposition to moving around in an open area and sparring, it feels like there is no place to turn.  Colin demonstrated that there are in fact quite a few different places to turn (in particular, towards the wall while you grab their head), and I'm committed to learning these well enough to (gods forbid) actually be able to use them if I ever needed to.  It hits quite a nerve, though.

Also, here is a picture of a box full of kittens: 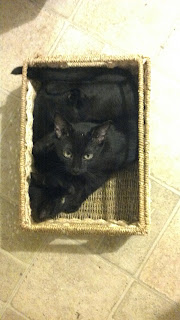 Email ThisBlogThis!Share to TwitterShare to FacebookShare to Pinterest
Labels: aping it up, Project Fear Less, Tam and Mina