...yes I know I'm late again. To make up for it, here's a picture of the view from my back door. Fall is still slowly sneaking up on us, but it's just warm enough to leave the windows open. 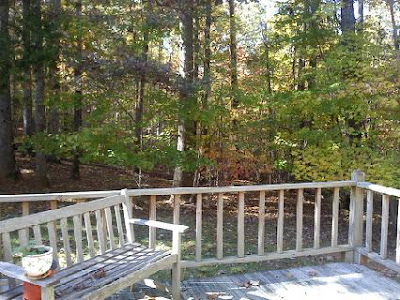 This week's questions (original post here) (btw Miss Pretty Pennies herself is late this week too, so hah!):
*Honey-lemon-garlic tea sounds terrible but it is the best stuff in the world for sore throats, persistent coughs and icky plagues in general (and I happen to like the taste!). In college, I relied on this stuff all through flu seasons when I had classical solos to sing and it never let me down. You need:
Juice the lemon(s) into a saucepan as much as you can, then scoop out the pulp and dump it in there too. You can save the peel to grate or zest into the finished product (which is why the scrubbing is important).

Smash or roughly chop the garlic - easiest way is to get a big flat knife, put the blade on top of the clove, then pound your fist down on it to loosen the skin and break it into chunks at once. Don't cut yourself. Then dump all garlic bits (other than the peel) into the pan.

Pour in some water, probably around 4 cups for these proportions. Start heating the water and once it's warm enough to dissolve the honey easily, go ahead and dump that in too. Bring it to a simmer and then lower the heat so it's barely moving, then pop a lid on it and let it stew for like 20 minutes. Strain it well (unless you want to chew on the garlic pieces along with your tea...which actually might help more, come to think of it) and sip it hot throughout the day. For an extra kick and if you've got especially nasty sinus problems, I'd also add a dash of cayenne pepper.