So on Monday we had a bitch of a workout. I'd worked a 9-hour day to start with, eaten an energy bar on the way to Crossfit and just hoped for the best. Don't remember the whole thing, but the WOD was something along the lines of: row 500m, 30 box jumps, 30 wall-balls (12lb ball), 30 pushups; 3 rounds for time. There was a sprint for warm-up and some other little things, but that's the gist of it.

Well, I tried to work at what I consider my normal level and DIED. I got through two rounds and then could do no more. It's like my muscles just would not obey me anymore.I was pretty upset, which I hope is understandable. I mean, there have been numerous occasions when I've worked out at higher intensity on less sleep and food and more work, so to be physically unable to keep up with either the other girls or my idea of what I should be doing was pretty maddening. I spoke to Bea about it and she said that I might just have reached a plateau for now (gods, I really hope not) or else that all the times when I was overstressed and under-hydrated and -slept are finally taking their toll, and my body is organizing a mass strike, marching around with signs and bullhorns when it should be running and jumping and lifting like normal. So we came to the conclusion that I need to pull back a bit, at least for a little while, and focus on hydration and nutrition and REST...you know, all those things that I should be using much more than I do.

So I took advantage of these past few days (my weekend) to do as she said, and just to relax. Did some housework and errands, went to Megan's abode to hang with her and Queso, and made some absolutely delicious food. Amam got loads of strawberries and cherries and other such lovely treats, so a lot of my "meals" have really just been chowing down on those. But here's some of the more structured ones: 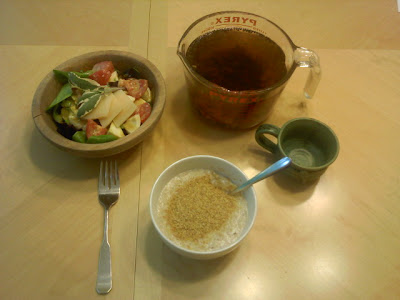 This afternoon: salad with chopped hardboiled egg, tomato and avocado, with homemade vinaigrette, 1 oz parm and fresh pineapple sage on top; vanilla porridge with oats and slippery elm and wheat germ on top; happy uterus tea.Another look at that salad: 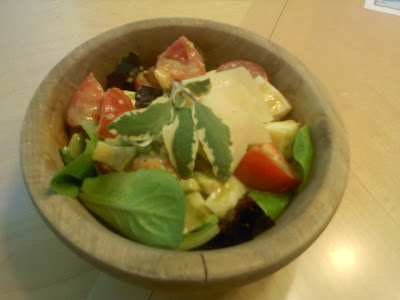 It was pretty amazing. I took all the ingredients except the lettuce and garnishes, shook them up inside a tupperware and let everything sit and get friendly for a few minutes, while the oatmeal cooked.

Crossfit tonight was much better, since I planned and timed my meals correctly and drank enough water, and also went (ridiculously, in my head...) slowly. But I made it through the whole thing without excusing myself to puke and wasn't collapsing or shaking by the end, so that's a victory.

Crossfit:
Post-workout recovery dinner!
The coconut milk was a complete impulse buy, but turned out to be a good bet - it's not too sweet or thick at all (in fact, at a casual glance you'd guess it was plain water in a glass), but it's got just enough flavor and body to it to flow wonderfully. Maybe that's a strange way to put it, but it just seems so wonderfully drinkable - just slips down your throat very easily, and makes you want to pour another glass right away. Try some. You'll see what I mean.

I'm rather ashamed to admit (but I'll say it anyways) that I only got the coconut milk today because I bought a chick magazine and saw a picture of Madonna drinking some. There was some little blurb alongside about how it's got natural electrolytes and helps rehydrate your body and is the perfect post-workout beverage, but seriously, who cares? Madonna likes it. Dayenu.