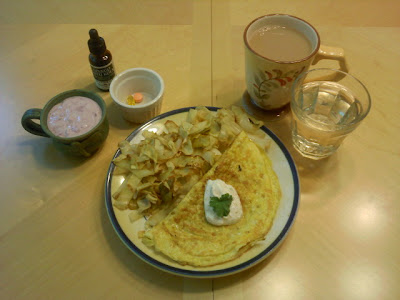 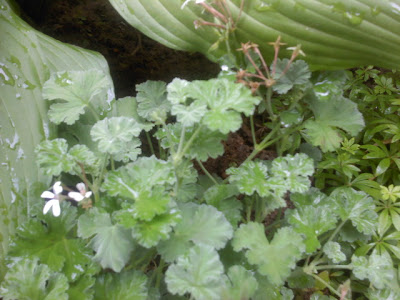 sorry for the blurriness! I'll try and get a better pic later

Notes: Omg you guys. You can eat pelargoniums ("geraniums," to the uninitiated, even though there's another plant entirely that properly bears that name. yes, I'm a gardening snob. shut up.)!!! I picked up this little cutie yesterday at the plant shop (for the interested, the other two plants in the picture are hosta and sweet woodruff). Not sure of the full Latin name or anything really beyond "Pelargonium: fragrant, edible," but it came with a booklet on recipes that these guys work well in. I wasn't in the mood for celery soup first thing in the morning, however, so winged it and made a simply omelette.

This particular variety was labeled as "nutmeg flavored" on the tag, and it's spot-on. I put a little grated nutmeg on the omelette to bring out the taste even more, but I'm envisioning a chilled yoghurt/milk drink with vanilla, maybe a drop each of cinnamon and clove oils, with a good small handful of this stuff blended in. Or maybe anise. Seriously excited about all these possibilities. And there are so many more varieties! Just there at the garden shop they had citrus, mint, rose-mint and apple-flavored ones, and according to the recipe booklet there are many, many more. Yay!
Dinner: ~7:30pm 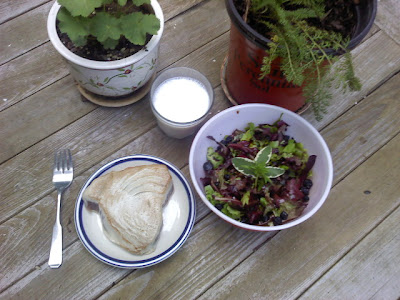 The sun has just gone behind the trees when I got back from work, but it was still plenty light enough to enjoy dinner on the deck with book, cat and happy plants (alchemilla/lady's mantle and achillea/yarrow) to keep me company.
Today we had our first crazy customer at work since I'd started there. She'd misheard what one of the girls said over the phone (read: she cut her off mid-spiel) and insisted that a $10 item was told to her as being $5. She was totally ready to pay the full amount and eventually did so - her only beef was that she wanted the cashier (who hadn't even been the one on the phone) to admit that she (kid) had been wrong in correcting her (customer). Yeah. That's it. Literally just say "You were right and I was wrong." When the kids (phone and cashier) recounted to me what they'd said to her, it was painfully obvious that the customer was entirely in the wrong - and maybe she was even aware of this. But as soon as the girl tried not even to correct her or say she was wrong, just to state the actual fact, she completely blew up - far, FAR out of proportion. It was utterly ridiculous. Damn people.
Posted by Unknown at 6:01 AM