I got your uncertainty right here

So yeah, I was supposed to write about this post on uncertainty, which has now been put off twice.  Welp, there's a hell of a lot of that floating around right now.  And also more fear.  And then, just as quickly, elation, which is all the way at the end of this post.  And even more fear and uncertainty to go along with that.

Yeah, that's been my last couple of days.

First, though, a recipe. 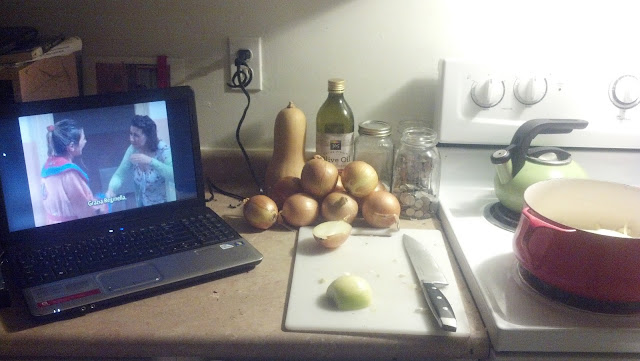 The text of the following recipe is from Tamar Adler's magnificent An Everlasting Meal.  Go get it right now.  The recipe itself is in block quotes.  Anything normally indented, inside brackets or of obviously poorer writing quality than the fantastic Ms. Adler is all mine.


"If you ever find yourself longing to cook a good vegetable but there is none in sight, get a deep pot and dig eight to ten plain, big, dusty onions from your pantry, or the cold dark onion bin at your nearest store.  Then caramelize them."

Why would you ever find yourself with such a longing?  Multiple reasons I can think of.  Maybe you're overburdened with grown-up life and longing bitterly for the days when you used to sit, swinging your short legs, at your mother's or grandmother's towering kitchen table, eating crackers and taking in all the smells and sounds of the well-ordered kitchen, and you want your kitchen to smell the same way.  There's a longing in you for sliced tomatoes and cheese layered on good bread and broiled; for tomato soup and toast; for cornmeal spoonbread with clouds of frothy egg whites piled on top; for mountain eggs and hot chocolate for breakfast on a frosty morning.  If it's late and you're exhausted in all senses of the word and there's no cornmeal or bread or cheese or milk or tomatoes at hand, none of those are options.  But you have onions.

Maybe you're terrified.  The deep-set, old-as-you-are dream to have your own small piece of land and serve up feasts grown with your own hands under a roof built with the same hands is trembling, threatened by fraud and the theft of your good name and credit.  That long-imagined tiny kitchen, smelling of woodsmoke and the herbs drying in the rafters and the dishes bubbling away on the stove, might never move from mind to world.  So you chop and simmer and roast and fill up jars with the bounty, squeezing as much reality as possible from the vision.

Maybe you really need a good cry and the onions give you a cover.


"Cut off their tops, then cut them in half through their roots, then lengthwise into slices about a quarter-inch thick.  Warm three tablespoons of butter [I used lard that I rendered last week] and three tablespoons [or just 'glugs'] of oil in a big pot.  When the butter is melted, add the mountain of onions, a small pinch of sugar [I used a tablespoon of some rosemary-infused honey I had lying around], a big pinch of salt, and a branch of fresh thyme [had none, so left it out], and stir it all well.  Cook the onions over medium-low heat, stirring them occasionally.  Add occasional sprinkles of water if the onions begin to stick.  If they start to sizzle, lower the heat and cover the pot, then uncover it when the cooking has slowed.  This will take forty-five minutes to an hour [or longer, in my case - just about the length of an Italian movie about a taken-for-granted housewife who hitchhikes to Venice, sells flowers, relearns the accordion and falls in love with an Icelandic waiter], and the whole mass will look soggy and unconvincing until right before the onions are done, at which point they melt completely into a golden jam and all of their sugars come out to toast."

This is what I do when I'm broken up and worn down and don't know what else to do and it's too dark or wet to go to the river.  I cook.  Caramelized onions, roasted carrots and turnips and red cabbage, a pot of stone soup with the last of the bone broth, a little ground beef and every sort of vegetable I had.  Now my fridge is full of jars of goodness and my heart feels a little lighter.

Someone I've never heard of filed his taxes as a joint return, claiming that I was his wife.  At the very least, he has my full name and my social security number.  I'm not sure if he has my address or if the IRS just sent the letter (addressed to the two of us) to the place on file for that SSN.

The return was wonky enough (the sweet old Southern lady on the IRS hotline kept saying "oh mah GOODness!" and "just outRAGEous!" when she was looking at it) to set off flags right away, which is why I got the letter in the first place.  So while this guy has my information and was after my refund (hefty, considering the fact that I'm a full-time student and not wealthy), he doesn't have that.  And now we've got his name and information and I'm filing a police report so the bitch goes to jail.  But that doesn't change the fact that my information is floating around out who-knows-where, ready to be yoinked and used to file taxes and open credit accounts and I don't even know what else.  Right now there's a fraud alert in place, but the big thing here may be the necessity to freeze my credit indefinitely.  I'd still have the ability to open it back up for specified periods of time - a couple days, a week, a month - but other than those windows, it wouldn't get built up by anything I did.  Which, if you've wanted to have a homestead since you were five years old and making little bales out of grass that had gone to seed, is fucking maddening.

This isn't nearly as bad as things can get - barely even on the spectrum, as far as some people have it - but it's very new and scary and as good as I thought I had gotten with managing new and scary things, this froze me.

I unfroze.  And I'm keeping up with the list of things I have to do to get this sorted.  And it's going to turn out ok.

As I was going through every scrap of paper I had in the house pulling out anything with personal information on it, ready for the shredder, I found an unopened letter from my school.  Upon opening, it showed itself to be a grant refund check for just over three times as much as the attemptedly-bilked refund (which was more than enough for a month's expenses, and although it'll be delayed for a minimum of six months while all the papers get filed, will still eventually go through).

This is a massively good thing.  But for some reason it caused more shaking and crying than the earlier shock.

So the current consensus is that uncertainty can be tougher than fear to deal with.

It'll have to end there for now.  There's a lot of tumult right now, and it needs mulling.