Surgery is not nearly as fun as it sounds

So.  I'm out of the hospital and fairly lucid, despite this heavy-duty shit I'm taking every four hours.  (PS: I'm gonna say that's the reason I might be a little more foul-mouthed in my writing than usual.  So far I've managed to hold myself back from howling "FUUUCK!" every time I tweak my arm, seeing as my mother's nearly always in earshot, but I need some kind of an outlet.)  I'm waiting for the latest dose to kick in so I can try and catch a couple winks, so I figured I'd share all the loveliness with you.

Honestly, it wasn't all that bad an experience.  Every single one of my doctors and nurses were totally spiffy.  Even the intern who bruised me up trying to get the IV in was a very sweet girl - it seems, however, that my veins shrink under stress.  There are FIVE needle holes from failed attempts in my hand and arm, with varying degrees of bruised-ness around them, including a real shiner that takes up a good patch of my forearm. Finally the nurse took over and got it in fairly quickly.  That was probably the worst part of anything that happened there, though.

Once the IV was in and the anesthesiologist was done chatting with another patient (very nice man and very good at his job but that dude could TALK!  Quote from the nurses:  "Where's Dr. So-and-so?"  "Oh, he's off somewhere talking." They both laugh.), I got a little something in the IV to calm me down and the doc administered a block on my right shoulder.  That's basically a numbing injection put in just below a nerve cluster so it spreads through my arm.  My thumb and first two fingers numbed up pretty quickly, but I could still feel the rest of my arm.  The other meds kicked in very quickly, though, so I was slightly past caring.  This was about when I lost all sense of time.

After a while, they rolled me into the OR.  I was still pretty content-feeling, but a lot more alert than they were expecting.  The surgeon noticed that my shoulder wasn't marked at all, so he quickly scribbled something on there, which I definitely felt.  "Is my shoulder supposed to be numb yet?"  Pause.  Some confused glances.  "Um...yes.  We'll fix that for you.  Don't worry, you'll be asleep for it."  Surgeon, anesthesiologist and one nurse rush around purposefully.  Two other nurses help me onto the table and give me a breathing mask.  "This is just oxygen.  Just take some deep breaths..."  Well, as it turns out, it wasn't actually just oxygen.  That's the last thing I remember before waking up.

I don't remember what I dreamed about, but I know it was all very vivid and seamlessly woven in with drifting into consciousness and seeing blurry nurses check my stats or just rush past before I dozed off again.  Finally there was more of the blurriness than the vividness, so I figured I was awake.  Everything was still flowing together pretty well, though, so I can't tell you at what point my mom came in to sit with me, or how long it was between then and the time we left.  I do remember saying very vehemently that if I ever had a kid, it would not be in a hospital.  Okay, semi-conscious self, whatever you say...

I do remember the conversation the people in the "room" (they're just separated by curtains) next to me were having...a little more specifically than I'd really like to.  As far as I could tell, it was an elderly lady who'd hurt one of her legs, accompanied by one or more daughters, all with very heavy, rather refined Southern accents - you know, the kind who actually still drink mint juleps.  At some point, she stood up with the aid of a walker, and immediately started pissing herself lavishly.  She was nowhere near shy about it, and neither were her daughters.  Some gems I remember: "Oh lawdie, it's all in my shoes!  They're just full of it!"  "Well now we're gonna have to rinse them out, Momma!  Don't let's forget now!"  And this one, a good five minutes after she started: "Are you still peeing now, Momma?"  "Yep, it's still just comin' and comin'!"

From ghoulies and  ghosties and piss-covered old ladies, good LAWD, deliver us!

That's all for now, folks.  I've got the deets on this fancy sling to share with y'all, as well as the pretty pictures they took of my insides while they were stitching me up.  For now, though, here's my flower.  They gave it to me when I left. 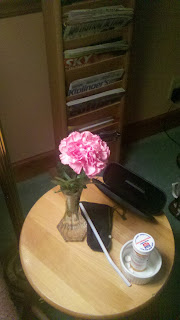