Last Monday I got up at some god-awful hour like five am (it didn't really matter, because I'd been too excited to sleep most of the night) to drive to the airport and catch an early plane to Ohio.  Why?  Because I got to go stay with The Man for a whole week!  (During which I opened my laptop maybe once.  So no blogging.)  And it was absolutely AMAZING.

Did I stick to paleo?  Hell no.  I wasn't even remotely primal.  I ate grilled cheese sandwiches and potatoes and corn cooked with bacon and cookies from Subway and marshmallows whenever I felt like it, and I drank coffee with milk (and sometimes cocoa mix) all day long.  And I didn't even try to think about calories.  I just ate what I wanted of what was there, when I felt like it.  And I focused more on the people I was dining with than the food itself.

Did I exercise?  Hrmm...well, yes.  Sometimes several times a day.  But...how shall I put this...I wasn't really focusing on burpees and air squats.  Well, not solo ones, at any rate.  Hee hee!  I kill me!

I did, however, get impromptu lessons on how to ride on of these:
It's like a skateboard with two wheels, and the fore and aft sections rotate individually.  I'm terrified of falling and freeze up as soon as both feet are on it, but I managed to go about two feet down the road a couple times.  I consider that a success.

Was I blissfully happy the entire time?  Well, no.  500+ miles is a lot to get over on a regular basis, but we manage.  And when it's suddenly shriveled down to nothing, it can be a bit of a shock to be so close, so soon, after months and months of distance.  Emotions run high and low and everywhere in-between before they finally level out (which usually takes just a few days) and the bliss does take over.  Sitting close together on an old bench, looking out over a perfect lake winking in the sun and letting the flood of feelings just rush out is a good way to speed up the process, too.  Especially if it ends with a whole bunch of kisses.

There weren't too many pictures taken - I didn't put on a shred of makeup or bother with my clothes save for the one day we went to a wedding.  Here's one pic from that day.  Please ignore the fact that I look like I'm about to eat the world and The Man looks (so he says) like he's shyly working his way up to strangling me.  That just gives us character. 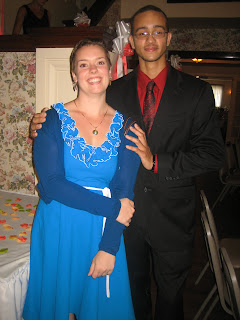 Yep.  There we are.  Two adorably awkward, beautifully flawed, regular ol' people who managed to stumble into each other one day and never wanted the moment to end.  Funny how things work out like that.  And it's taken a hell of a lot of effort on both our parts to pull each other along this far - but now it's been just about three years since that first day, and hopefully we'll both keep on pulling for three score more.  Because you know what they say... 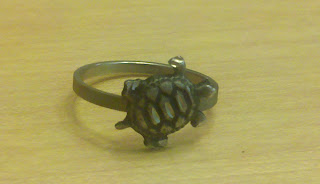 ...slow and steady wins the race.