So that bag of Palahniuk-esque fat scraps I brought home the other day?  No longer scraps.  But I'm a little unsure of the outcome. 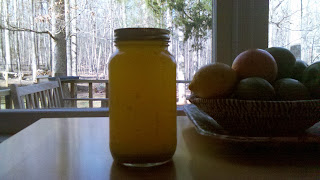 This is pure rendered beef fat (well, as pure as I could get it; note the floaters collected at the bottom despite the straining).  It's still translucent here, but that's only because it's still melted.  The reason for my uncertainty?  It's...yellow.  More than that, it's a medium-deep golden that, if this were chicken fat, I'd be very happy with.  But ALL of the sources I saw said that tallow should be pure white.  And it is most definitely not that.

Could be my method of extraction.  I cut it into small dice-sized chunks, thought about freezing and then putting through the food processor as Mark says to do, then left it in the freezer too long and decided to just throw it in the crockpot with some boiling water and see what happened.  It seemed to be taking a really long time, so I wanted to find a way to further break up the pieces so that they'd melt faster.  So...I fished out all the chunks and hit them with the stick blender.  It was pretty gross.  It looked like oatmeal but I knew it wasn't.  Thank me for sparing your eyes of that sight.

It could also be the fat I used.  There was definitely some good "Bible fat" in my batch (that's the stuff that's hard, like cold butter, and easily flakes into bits that look kind of like pages), but there was also a good amount (probably a larger one) of this floppy, squidgy stuff, like really fatty chicken skin.  It was all gleaned from brisket that the Kitchen Queen at my workplace was working on, so it was just whatever I could get from that.

EDIT: Apparently the color difference is (at least partly) because the cow was grassfed.  W00t!
Posted by Unknown at 6:38 AM