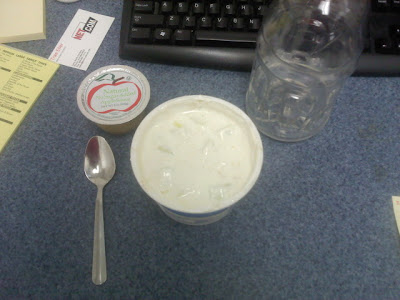 Notes: This yoghurt stuff was pretty good. I was going for something like the cuke-yoghurt dip/sauce stuff that amam sometimes makes, but a little more substantial. This ended up rather heavy to be a main dish. Next time, maybe a mix of Greek and regular yoghurt, if I don't have any of my own on hand. Also, some dill would have been nice.
Lunch: ~1:30pm 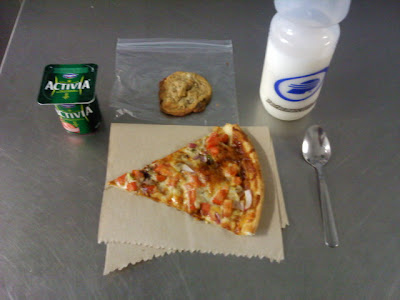 Notes: Yep, I broke down again. Was rushed again in the morning, so just grabbed what I could find. Come lunchtime, Little V's pizza, fresh out of the oven and smelling up the whole place with deliciousness, was just looking SO much better than my squashed PB sandwich. So yes. I had pizza again. Maybe I should start planning and making food the night before. At least planning.
Got out of work around 5:30 and raced over to the DPAC, getting there just barely in time. For what, you ask? Fucking WICKED, that's what!!! Zomguh. It was pretty intense. Here's a pic of the stage before the show started from our seats, which were firmly in the nosebleed section. Note the enormous dragon over the stage. 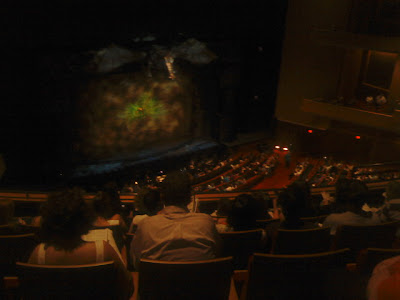 The plot of Wicked, as I've said before and will probably say again, isn't really much more than glorified fan fiction. There's also quite a few standard plot devices used that just kind of annoy me at this point: "Omg it's a love triangle!" and "Omg he's her father!" and "Omg she's not really dead!" etc etc, which could all be seen a mile off. So as far as that goes, just meh. But...the music. Oh gods, the music. That's the only reason this thing's gone as far as it has, and it's a damn good reason at that. Even if my dear sisters kept singing along :P
Dinner: 10ish? pm, of course
Notes: Got stuck in the parking garage on the way out. That was a fun half-hour just sitting there. But I had time to eat dinner and listen to awesome local radio while inching along. And then I took the freeway home and still beat the rents :D
Posted by Unknown at 10:16 PM