I left off right when we were headed up to Ohio.  Unfortunately I don't have any photos to illustrate this next portion, but I hope my wittily sparkling prose will make up for that.

The reason we were headed up to the frozen North in the first place was a mini-convention about Mrs. Murr's exercise methodology of choice, T-Tapp.  Anyone heard of it?  I hadn't.  From the teeny little bit I read about it beforehand, most of which mentioned core stability and activation, I'd imagined a series of Pilates-esque balancing sorts of movements.  Well...not quite.  There's a lot of standing in one place and moving in various directions and ways, focusing on activating whatever muscle group you're working on despite the lack of actual resistance.  The deal is that you "become your own weight machine" by doing this.  A few of the moves I remember are very slow shallow lunges (decent), a move that approximates that machine where you rotate your arms to pull the levers together in front of you - don't know what it's called (I could only do this one-armed) and the "hoe-down," which can only be illustrated with a video.

The magic really starts at about 39 seconds.

I think it might be the fact that I don't actually like real weight machines, but this didn't float my boat too much.  It's obviously worked for Mrs. Murr and the other attendees of the event, and they're all immensely happy with it, and I wish them mountains of continued success.  But I think this just illustrates the fact that it's really not the methodology that matters - it's whatever works for you and with you to get you to the point, both in physical health and happiness, where you want to be.

(That said, as for me and my house, we will lift heavy things and run around barefoot.)

While in the Land of the Burning River, I also got to stay with The Man & fam for a little while, and the two of us met up with my lovely friend Liz for lunch, conversation and a perusal of an awesome little vintage store, "The Funky Hippie."  Check it out if you're ever in Akron.  Here's my haul:

I eyed this gorgeous long dress as soon as we got in the door, but didn't actually think to try it on until The Man suggested it.  It's a stretchy velour-type fabric, but not at all scratchy on the inside.  Even better: it fits me like a glove.  As in, I don't need to wear a bra with it.  Given, I've only tried it on for brief stretches, but I think I could do a few minor alterations to ensure the comfy fit and coverage stay indefinitely.

The super-fantastic owner of the shop (whose name I unfortunately didn't catch) talked to me about swimming in ponds and driving to/through North Carolina and other bits of randomness, and then threw these earrings in for free when I bought the dress.  They are made of pure sparkle and reach to my shoulders, and swing every which way whenever I turn my head.  I'm wearing them right now and I keep swishing them back and forth.


And zomguh look at the BACK!  It's obviously sheer (which makes the lack of a need for underpinnings even more serendipitous) and just holy gods look at it, it's so PRETTY!  It makes me smile :)


By the way, the reason I talk about the dress and other trivial things so much is mostly that I actually have pictures of it, unlike The Man or Liz or the ridiculous amounts of 50-cent McDonald's ice cream cones I ate, paleo be damned.  I need to change this - it's so much easier to remember events when there are images to spark the memory - but I don't think it's necessarily a bad thing to be so caught up in actually having the fun times that you forget to document them for posterity.

Here's a little tidbit I do remember pretty well, though.  So Liz, The Man and I were all in the same computer science classes and labs during one year at Hiram.  Liz and I were totes buds, but for some reason The Man and I never actually hung out then, just occasionally worked on lab papers together.  I remember one long night the three of us spent writing our papers in the computer lounge, with us girls on one side and him on the other, and he kept zooming across the room backwards in his rolling chair to compare notes.  We were reminiscing about that very night, and then everyone paused just to remember it.  Then I started to ask Liz,

Honestly, neither did I.  It's not that I thought about and scoffed at the possibility, it's just that I didn't even consider it.  And now, I realise that of the years since that day, we've been together for the majority.  And...well...let's just say that my collection of pond creatures is growing. 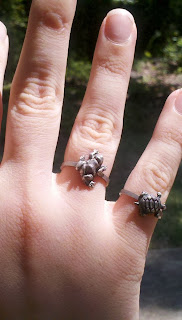 Gosh, we are just too saccharine for words.

Next up: my triumphant return (sans sling!) to the Land of the Pine, various experimentation with fermentation (delicious!), a big huge pile of old drawings (flying squirrel dragon, anyone?) and...preparations for the first day of school.  Which is this coming Monday.  That's right, bitches.  I'm back in the world of higher education, and I'm gonna totally destroy it.  Wish me luck.

PS: Caitlin, I an a mega stupid-head for not seeking you out on this latest visit to Ohio.  As soon as I can manage another trip, I'd really really love to see you, if you can spare the time.  And hopefully we can have cakes and ale and bonfires, if you catch my drift :)
Posted by Unknown at 9:53 AM