This past weekend was exhausting. That's true for almost anyone in the food biz every weekend, but this particular time around it was pretty bad, even by my standards. I worked later than scheduled every day, and ended up staying to close twice, with one of those times being entirely single-handedly. My back hurts and my eyes hurt and I have dishpan hands and my feet and calves are still in utter agony, so much that I actually skipped Crossfit last night to hobble home and eat bowl after bowl of amam's fish stew (with plenty of seaweed chucked in for good measure). And then I watched videos on Youtube and cuddled with the cat and read a book in bed and I did not blog or even think about money because I just didn't want to. Because sometimes that's what you have to do. However, now I am back and in better spirits (meaning the second pot of coffee is on the brew) and I'm totally ready to think and talk about finances. First, this week's questions! Original post here.
As a treat for you guys (and by treat I mean incredibly nerdy and boring thing that I think is pretty cool), I'm gonna show you the system I use to keep track of my money. I use mint.com and my bank's website religiously, but I also like to have something physical that I can have with me at all times. For your viewing pleasure, I present the two black books that run my life: 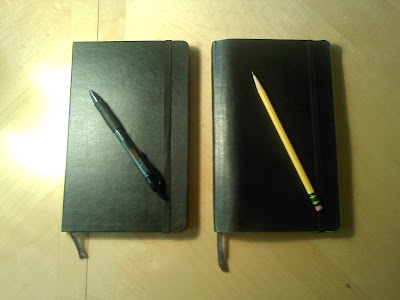 They're both Moleskine notebooks - the ledger (on the left) is a hardcover graph-paper one and the planner is a softcover, because I keep the pencil tucked inside it. I like to be a pretty impromptu person in general, but I've come to realise that when it comes to certain grown-up things like scheduling responsibilities and planning finances, I need to be absolutely solid in my routine, right down to the writing implements. Dixon Ticonderoga #2 pencil for the planner and Pilot G-2 07 pen for the ledger. Period. Although I am thinking about getting a red pen to use in the ledger for negative amounts. Wow, I'm boring. 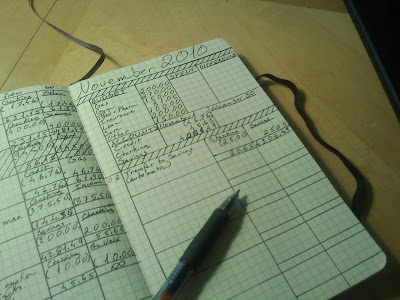 Here's the start of November in the ledger. I write out what I'm planning to spend in each of my budget categories, with spaces beside that to fill in what I actually spent and the difference between the two figures at the end of the month. I also write down the starting and ending balances of all my accounts. (By the way, you can see the craziness that ensued from that bouncing check in the last of the October transactions on the left there. I had to cut out the explanations for those because they were all waxing poetic about what Bill could do to himself and what implements he could use.) 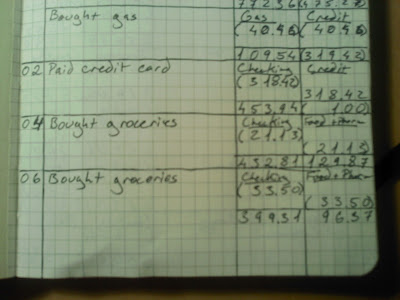 Some transactions from last month. I was still working on the kinks in my recording method, which is why some things are a bit off, but the general gist is this: on the utmost left, there's the date. Then, an explanation of the transaction. The two columns beside that are labeled "from" and "to" at the top of the page - that is, money is being taken from one account and going to another. With every transaction, I update the running total of both the account the money is coming from and the amount I still have left in that budget category. Amounts in parentheses are negatives (which will be just written in red as soon as I get that pen!)

And that's about it! I'm still working on the whole system (which I've just been keeping since last month) so I'd love any tips or input if you see a way you think I could improve it. And as thanks for making it through this tidal wave of text, here's proof that fall has finally come to NC...kind of. Sweet alyssum in my garden (usually a spring flower) beautifully juxtaposed with autumn leaves. It made me happy :) 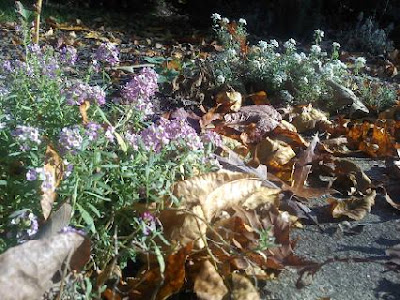