And then I ate it all

You know what the only thing better than finishing up your strictly acetic cleanse-y type dealio and being able to eat chocolate again is? 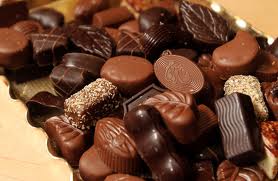 Finishing it up just in time for the monthly hormone poisoning.  Holy gods.  The stomachache and sugar coma are SO worth it.

So I finished Bonesetter Stew's cleanse thing!  Yay me! I don't have new pictures yet but here are the numeric stats:

Stew & I postulated that a decent overall goal might be 20-21% body fat, so this is a really good first step.  Note that I'm definitely not tying myself to that number.  If I keep cutting it down and start to really lose my boobs, you can bet your ass I'm reevaluating my goals.  Having really nicely-cut abs would be cool, but not at the expense of Ralphie and Louie.

Basal Metabolic Rate:  1518 kCal, down from 1540 before.  Merh.  I wqs hoping for a move in the opposite direction, but I guess that goes along with the slight drop in muscle.  Bring on the steaks and heavy weights!

Daily Energy Expenditure: 2278 kCal, up from 2002.  Joanne, you told me what this meant before.  Does the increase just mean that I'm doing more during the day?  If so, how can they tell that?  It seems an awfully complicated and variable thing to measure so precisely.

I forgot to measure my waist and hips.  And now my waist is like ba-FWOOOM! from the aforementioned hormone poisoning so I'm not really inclined to want to whip out the ol' tape measure.

So, overall, decentish results, at least from my perspective.  Honestly, though, I kind of hated it while it was going on.  My self-esteem and mood dropped pretty low, and my trichotillomania started acting up again...a lot.  As in, I had a dream about shaving my head two nights ago and now I really want to act on it.  I also had these batshit insane cravings for stuff like skim milk (I can't stand the taste anymore, but wanted it like crazy) and butter (not on anything, just by itself).  And when I roasted my weekly chicken, I saved the fat as normal for use in future cooking.  But I got this incredibly strong urge to get a spoon and just drink the liquid fat right there.  I was simultaneously nauseated and absolutely drooling for it.  Mindfuck.

All said and done, I don't know if I would do this again.  Like I said, the results are decent, and I don't know how much of the weird thought processes were because of other things and just coincided, but the coincidence is enough to give me pause.  I don't like cringing when I look in the mirror.  I don't like ripping at my hair and skin enough so that I'm sore and bleeding.  And I really don't have any desire to drink straight fat.  Just ew.

Has anyone else done this dealio?  Ashley, I'm looking at you.  Are my experiences just a fluke?  I'd really like to hear that they are.

Email ThisBlogThis!Share to TwitterShare to FacebookShare to Pinterest
Labels: None