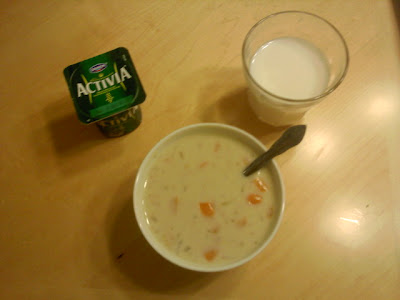 Notes: A pretty good day. I cleaned up my room some more - moved furniture around a couple days ago and there are still boxes and piles of books everywhere. It's so hard to strike the perfect balance between bedroom, closet, office and chill space in one weird-shaped room with no built-in storage except for the space under a window seat. Also I have a ton of books. It's a little crazy. I think I'm addicted.
T and I were talking about all the possibilities we both need to choose from right now, and he brought up the idea that I could work on getting back to Hiram sooner than I'd been planning and we'd get an apartment together. Now, part of me is jumping up and down and saying "He brought it up without provocation? Hell yes! Give me an hour to pack!" and the other part is thinking about all those dozens and dozens of times I heard the advice to never ever move in with each other if the primary reason is money. I don't know if it's the very primary in this case, but it's second at best. Still, it's something to consider.

Midnight snack
Notes: T is stressed. And that sometimes affects his diet a lot more than I wish it did. This is partly a calming late-night hot drink for myself and partly an experiment to make simple, tasty, nutritious things that can help with stress, etc.

The slippery elm is used a lot as a nutritious gruel (yes, that term is used way more often than necessary) for people who need some nutritional bulking up. I've put it in my oatmeal a lot before and liked that...and I'm thinking I'll stick to that application. In liquid it seems to make the slippery "jelly" it's known for just around the little granules of powder, making for a rather gloppy texture with distinctly more solid bits suspended throughout the whole. It's not horrible - I finished the whole thing! - but then again, I'm used to it. Perhaps it would work better if I let it sit for a while and finish gelling, maybe blending it up after several minutes.

I've done drinks with just milk blended with yoghurt, with or without flavor, and they've turned out fantastically. I've always done them cold before, though. Should have tried the slippery elm and yoghurt separately in conjunction with the hot milk, as now I can't tell if the texture was entirely due to the former or maybe the yoghurt was curdling a little. Next time I'll try just milk and yoghurt and vanilla, no sweetener. And no skim milk. Ew.
Posted by Unknown at 7:53 PM